Getting scientific about terminology gives an insight into the future of glamping, reveals researcher Greg Watt. 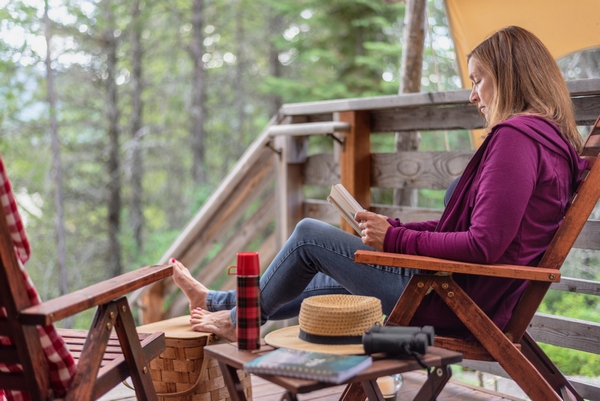 While the term ‘glamping’ has established itself within recognised lexicons, the term ‘glamper’ is less acknowledged. Much of this has to do with exclusivity. People that go glamping don’t always go glamping. It’s not an all or nothing designation. For some, glamping is captivating, and they constantly seek to get away at every chance. However, for others, going on a glamping trip may just round out their holiday choices (which may be varied). For the former, glamping is a passion; for the latter, it is a novelty. Both have been glamping, and therefore both can be perceived as glampers.

Glamping had manifested itself in various forms before the millennium, with the advent of European styled comfort camping, African safari excursions, Middle Eastern Bedouin desert experiences, and niche Asian resorts embedded in local ethnic rurality (Bali being the exemplar). Patently, glamping characteristics have been around for generations without any mainstream appeal. So, what changed?

It is clear that glamping in the UK obtained significant publicity from the likes of the Glastonbury Festival and gained modest popularity from 2005 onwards. Despite this, Google Trends1 reveals that “glamping” as a term received little attention until about August 2010 in the UK and most other countries the following year. From this time forward, glamping and the idea of being a ‘glamper’ became more prominent, more substance was attached to the terminology, and identifying as a glamper took on some significance.

Is it the pull of glamping that attracts people, or is it the push of some inner need or desire within people that makes glamping something they choose to do? Perhaps it’s a combination of both. Reasons are eclectic and chaotic, regardless of the theories that attempt to pigeonhole their motivations. For some, being a glamper is as superficial as it is fanciful – to get great Instagrammable photos!

Have ‘glampers’ evolved?
Today’s busy work-life is performed in confined environments, with stressful challenges, under impossible timeframes. For some there is the necessity to escape and find time to re-evaluate their life, re-energise themselves and revise their pathways. Glamping provides that time away.

Some academics hypothesise an ‘evolution model’ for glampers. That relating oneself as a glamper is the result of mental and emotional attachment to ‘getting back to nature’. All people hold a view of the world and how we impact it. Further, everybody has a self-image of how they relate to that world. Identifying as a glamper allows people to express empathy for notions associated with glamping such as the natural world and the simpler things in life.

Further, in a world governed by social media postings, it is not sufficient for identity representations to be kept personal. In this regard, not only are glamping spaces and experiences inherently photogenic, many of the notions associated with glamping have positive social connotations.

In the evolution model, glampers have made decisions about themselves, who they are, what they stand for and how they want the world to be. Commitment to glamping is therefore likely to be steadfast and enduring.

Are glampers created?
Have ‘glampers’ been created? Have they been born out of the consequence of external events? Did the global financial crisis, and now Covid, cause people to have staycations for their holidays, revitalising taking time out in the country?

There is no doubt that the global financial crisis affected a broad cross-section of society everywhere and caused both economic and social upheaval. While the publicised collapse of financial institutions occurred in 2008, its widespread effect would not be felt in Europe until 2009 and 2010, with breathtaking damage to the UK economy and the Eurozone crisis2. Reacting to adversity, vacationers looked to staycations, with camping holidays gaining substantial interest (Daily Mail, 2010).

However, a new attitude presented itself. No longer were such vacations to be a test of outdoors endurance, but instead, the trappings of comfort and the pretence of luxurious consumption were introduced. If the ideal holiday became unavailable due to financial constraints, then its semblance could be created. New advances in tentage, cosy beds, laid on power, gourmet food and new adventures in socialisation fuelled upscaled and upmarket camping.

In this fashion, it can be argued that the advent of the glamper is not an evolution of tourist preferences, but instead, the sharp reaction to political and economic events.

A bit of both
It can be argued that it was not the immediate impact of the financial crisis, nor the resultant surge in staycations, that created ongoing interest in glamping. Instead, it was the more contemplative and introverted view of life that living in the outdoors nurtured. People who would not normally spend time in the wild found themselves enjoying country landscapes.

This secondary, but no less critical consequence, was a reconnection with rurality and the natural world. Many were urbanites who viewed the societal carnage occurring around them and began to re-assess their pathways, the things they thought were important, and the differences they now wanted to pursue. Reinforcement of core values also came with the rising awareness and gradual acceptance of global warming and an increasing political instability presenting itself globally.

Glampers and Covid-19
If glampers have come about through any of the pathways above, what then has happened as a consequence of Covid-19? and equally important, what will happen to glampers as the effects of the pandemic diminish?

The Google search for ‘glamping’ as a word both globally and in the UK has enjoyed a constant increase year on year since 2010. However, in 2020 searches doubled from the year before. This was a direct consequence of Covid-19 and the increased popularity of staycations. In the following year, 2021, glamping has not been searched for as much.

While glamping as an online term enjoyed appreciable year-on-year increases since 2010, it truly obtained a watershed moment during the European summer of 2020. Google Trends shows that “glamping” as a term received 150 per cent searchable interest globally, with this increasing to around 190 per cent in the UK.

Glampers post-Covid
If glampers have, in fact, been created by circumstance, there is a concern that they are merely transitional travellers, and when whatever is to come actually comes, they will simply morph into another transitional entity. Are glampers fickle, and glamping merely a fad, and not a sustainable trend? If that occurs, what happens to the glamping industry?

The latest Google Trends statistics provide some clues. In almost every world region, searches for glamping in 2021 have reduced compared to 2020. However, the reduction is not a collapse. Simple statistical smoothing indicates that the growth in interest in glamping (and, as a consequence, glampers) is consistent with pre-Covid predictions. If this is true, then Covid has provided a short impetus to the industry, which has since settled.

Growing world instability, environmental concerns, and financial worries are likely to fuel people’s desire to escape, if only for a time. Driving the popularity of glamping, and an increase in those identifying as glampers, is the new interpretation of luxury. If the global financial crisis initiated the reflection and realignment of goals and values within the societies of developing nations, then Covid has been a stark reminder of the fragility of humankind. In re-evaluating and recasting themselves to meet future challenges, people are likely to deliberately take time out in spaces away from their everyday lives. Becoming a glamper, and spending time in natural sanctuaries where life is much simpler, may quickly become a lifestyle necessity.

Greg Watt is currently acandidate for doctor ofphilosophy at AucklandUniversity of Technology.An avid traveller andadvocate for authenticity intravel, Greg’s research concernsa global study of glamping spaces and experiences. His interest stems from an association with small boutique and community tourism projects within Vanuatu and New Zealand. Both countries are blessed with beautiful landscapes, along with an outdoor presence. Greg also writes informative articles about topics, destinations and social entrepreneurship within tourism at https://watt.nz