Last November, as the rain grew heavier, Julie Whalley was starting to feel anxious about the Christmas event she was planning, but nothing could have prepared her for what happened next.

Having been an event organiser for many years, I thought I’d got this planning malarkey sussed. Many other event hosts request my expertise and experience on the ground as a consultant to help them plan and market their events as well as to oversee them. My checklist was extensive; being a perfectionist takes its toll, but it’s the thrill of plate spinning that I enjoy most about the events industry.

The support for a Christmas event I was planning in my home town was gathering momentum among exhibitors at the food festival I co-ordinated and local tourism association members and retailers, as well as family and friends. It had not been the best of years for me to date, and in hindsight my female intuition should have collared me with a right hook and pinned me down. However, I believed in this event. I knew I could pull it together and decided to go ahead.

I started planning a huge festive fair, the likes of which the town had never seen before, which would encompass family fun, entertainment and lots of gorgeous top quality products that would make perfect Christmas gifts.

By August 2015, I had two members of staff. Together we visited the site with contractors, talked to the council, priced everything up, set a budget and planned the marketing. Due to the timeframe of the event, it looked likely that a Temporary Event Notice would be granted with no issues, providing we set a curfew on the music. From then on, we thought it would be plain sailing.

However, although the council was in support of the event, there were objections from a particular group of retailers. This saw our plans being rejected and the need for a full license application to be sought.

Our Facebook account went wild with support for us. For days people aired their views about local politics, questioning how councillors could vote out the type of event the town needed at this time of year, and asking how they could not see that the town folk did not want to travel to other towns for a lovely Christmas fair when they could have one hosted by a local company.

So, there I was with my team, sat in the local pub, flummoxed, but content to let it go. That was until the people who had seen the cancellation notice on Facebook started to rouse my spirits and encourage me to rethink the plan. Coming up with all sorts of alternatives, some viable, some ridiculous, they spurred me on.

The next day I received word that a couple had offered the use of some land at their business premises and invited me to go and discuss the potential with them. My gut instinct was to say no, but I didn’t listen to it. It turned out to be in a good location between two major towns, so once again it was all systems go.

For the next two months, we set about revisiting prices, booking contractors and marketing the event. A friend, whose support during the Facebook campaign was terrific, offered her services too.

The site was level, with good parking and terrific access for both exhibitors and visitors. Our marquee layout altered only slightly, reducing the cost in the process, and everything was really going well. Ticket sales were a bit slower than anticipated due to the inclement weather, but they were good enough to warrant going ahead.

Before the storm
My friend and I visited the site the Sunday before the event, but apart from being buffeted by the wind and rain, we felt that from a health and safety perspective, all would be well.

The next morning the marquee team turned up and things started to happen. Over the course of the week the rain got heavier and the mud got deeper, but then again, it was November.

By the Thursday night, heating, lighting, ice rink, sound system, exhibitor shedding in the marquee, flooring, walkways, WCs, security, bar, demo kitchens and so on, were all ready to go. Friday afternoon and the rain was still coming down. Although raised further than normal, mud was seeping through the floor boards. A lot of mopping went on that afternoon. Decorations could not be hung due to the weather, so my gloriously planned decorated trees and beautiful festoon lighting could not be erected, but the show, I was told, must go on. 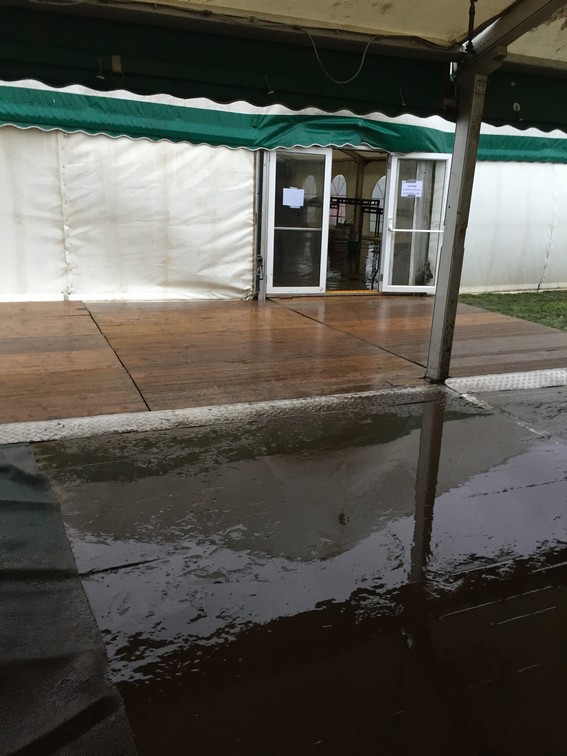 One exhibitor decided to back out, but everyone else stayed put, glad that at least one Christmas event was still going ahead. When visitors started to arrive, they were not in the numbers we were hoping for, but they were spending money and enjoying the mince pies and mulled wine, an explanation of how the weather was affecting us keeping most happy. However, by now storm warnings were out for the weekend. How did I feel? Like most people – panicked and rather hoping it would dissipate before it reached us! What did I do? I started revamping my plans B and C.

As the exhibitors left for the day, the musicians turned up. By 8pm the wind was howling; the rain had abated somewhat but the marquees were really starting to bear the brunt. Two emergency exits were smashed to smithereens. Thank goodness the bar was more or less empty of people.

Needless to say, there was not much more any of us could do apart from secure things as best we could and cross our fingers. By 10am on Saturday and with Storm Desmond predicted to reach our area later that day, I cancelled the event. There was no way I was risking anyone’s life and limb to earn my money back. That’s the risk you take with events. It was made even worse when we called the insurance company and were told we were not covered for that situation. Solicitors were later instructed to fight this decision but to no avail.

Safety first
During the week leading up to the event my thoughts had quickly turned to the health and safety implications of going ahead. This was a very difficult and huge decision to make, but fortunately my military training and experience has taught me not to panic, to be rational and look at the worst case scenario and work backwards.

My main task was to get everyone off site as quickly as possible. All the stewards were sent to help the exhibitors – some of course grumbled, but fortunately those that knew me well realised I would not have called it off unless I felt it was absolutely necessary. In less than an hour and a half, everyone with a stand was off site. When I mentioned that I would try and provide a refund, most of the exhibitors said that it was not necessary, that they understood what had happened and would write it off. 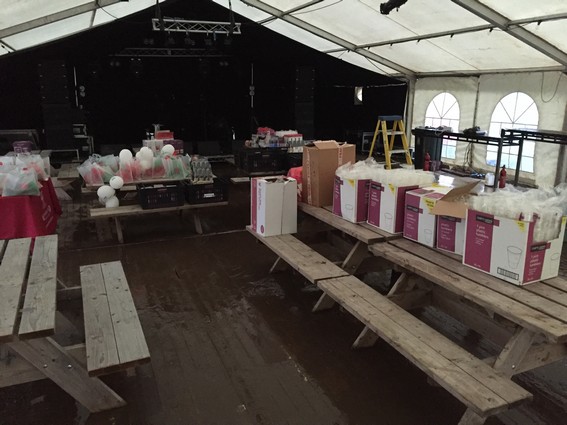 While the exhibitors were leaving under the care of my event friend and the stewards, my job was to Facebook, Tweet and email the huge list of attendees. I contacted local newspapers and radio stations in order to reach as many people as possible before they made their way to us. All those with tickets had to be issued with a refund using an e-commerce system that didn’t allow batch refunds, so that was a big task in itself. The entertainers who we had booked were contacted and were sympathetic; some of them were dealing with their own floods at home.

Anything that could be severely damaged was taken down and put inside the marquees; the bar was packed up as far as possible. That night the storm hit. How those structures stayed up I’ll never know. The marquee company concerned did an amazing job of securing it all.

Lessons learnt
The realisation of the enormity of what did and what could have happened hit me later, but I gained great strength and support from those closest to me. I’ve taken time out this year to concentrate on my other business, Event Owl, an exhibitor processing system for outdoor events. My aim is to generate money to pay people back so that I can still hold my head up high in the events industry. Trust is hard to achieve.

So, what did I learn from this experience? Things do go wrong. Some due to a lack of initial planning that are easily rectified, such as over booking a workshop; and others you could never have foreseen, such as a random gust of wind knocking over a five tier, iced wedding cake five minutes before the guests arrive!

You have to prepare yourself mentally when deciding to host an event. Keep running things over and over in your mind. Nothing you think of when it comes to running an event is stupid, it’s just that some may cause you more hassle than benefit, so it’s best to weed them out early on. I use the tried and tested ‘courses of action’ method – the ‘what if?’ and ‘how would you overcome this?’ of scenarios A, B and C. The one with the least ifs and hows is the course of action I take, then I’ve always got two well thought out back up plans to work with.

Have a good team of people around you whom you can trust, people who can understand why you did what you did and can offer support when things go wrong. Things will go wrong.

Running your own event is risky, it’s as simple as that. What happens next? Life is a journey, as they say.

About the Author
Julie Whalley trained as a caterer, had a career in the army then turned her logistics and planning skills to event organisation. She set up and orchestrated Clitheroe Food Festival from 2011–2015. She still consults on the event which attracts over 20,000 people.