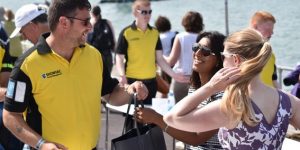 Sir Ben Ainslie ruled the waves to make the return of the Louis Vuitton America’s Cup World Series (LVACWS) to Portsmouth a triumphant one, but Showsec has received glowing recognition for its part in the success story on dry land.

As official crowd management supplier to a spectacular sporting occasion that attracted 130,000 people to the banks of the Solent, it mounted an operation aimed at enhancing the experience of those enjoying three days of sailing action.

The company’s south coast team was engaged by two new clients, Team Origin and Sportsworld, to provide their specialist services throughout the Race Village, hospitality areas and beyond on Southsea Common for LVACWS.

Ainslie’s thrilling victory on the waters of the Solent with his Land Rover BAR team was the highlight of a memorable occasion, leaving organisers to declare it even more successful than the inaugural event held in Portsmouth last year.

“The event this year was much more successful than the one in 2015,” declares Jeremy Troughton, operations director for LVACWS Portsmouth. “Much of this was down to knowing our audience, their expectations and the overall demographic of the people attending. In Showsec, we found a crowd management company who fully understood our primary aim of being customer focused.

“They absolutely embraced the fact that their staff were the first and last impression people had of visiting our event. Therefore, the choice of individual staff, not only in key positions, but right across the event, was critical to its success.”

He adds: “They were personable, well-spoken and engaged with the public, helping out, directing and advising where necessary. We would have no qualms in recommending Showsec to other events in the future because they ticked all the boxes from our point of view.”

The Showsec operation featuring 150 staff covered many different areas of the LVACWS event including the ticketed Race Village, the unfenced, unrestricted free-to-view area on Southsea Common, car parks and the park and ride site.

“A number of challenges required specific crowd management teams to monitor crowd densities and crowd movement, as well as plans in place to deal with any crowd surging in the area around the waterfront,” says Troughton.