Keith Burchett, founding director of the Secret Widget Festival, shares how his event was saved by a brave decision on a last minute relocation. 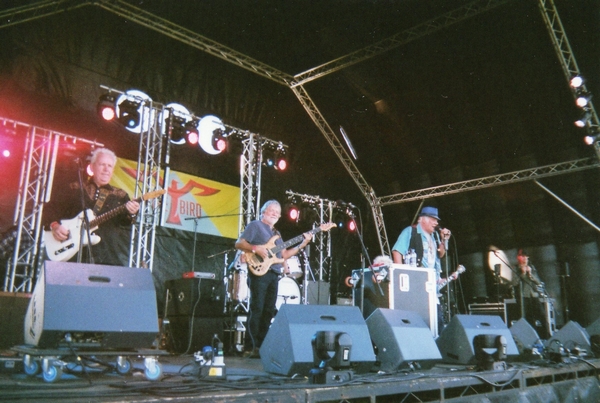 After leaving Weyfest and A New Day Festival, the two music events that had played a significant part in my life for the previous 14 years, I was in no rush to become involved with (let alone start) another festival. But things changed on a weekend break with my partner Mary on the Isle of Wight for a family gathering. Mary’s granddaughter was celebrating her 24th birthday and chose to visit Calbourne Water Mill.

When we got to the site it immediately reminded me of the Rural Life Centre, a working museum in Surrey that is very dear to me and is the site which I was responsible for introducing Weyfest to in 2007. When I found out it had its own campsite I started visualising a festival, and after a meeting with the owner it was a done deal. I formed a management team with Mike Sands, who had run stewards and security teams, and Barry Cogger, who had supplied the stages and overseen the power supply at both the other festivals. We spent several months visiting the site measuring it and planning for this new event while hand picking the crew from the great teams that had, and still do, work the previous festivals. We knew it would be a challenging site but it showed a lot of promise.

We needed a name for the festival, not the easiest thing to come up with by any means. It started being known as the Secret Widget, almost as a joke, but after a while we decided we should go with it.

After some months had passed things were not running quite as planned, we were not getting the deals that had been promised us for some time from the ferry companies and another festival that had been advertised earlier in the year moved to the dates we had set leading to a demand for the infrastructure and supplies we needed to hire. Sales from the mainland were also just not coming our way.

We had a crisis meeting and it was decided to look for a suitable site for the same dates on the mainland. We had already booked and paid deposits on most of the bands and could not afford to lose either if we were to save the festival, but with less than three months to go until the gates were due to open we knew we would be up against the clock if it was going to happen. 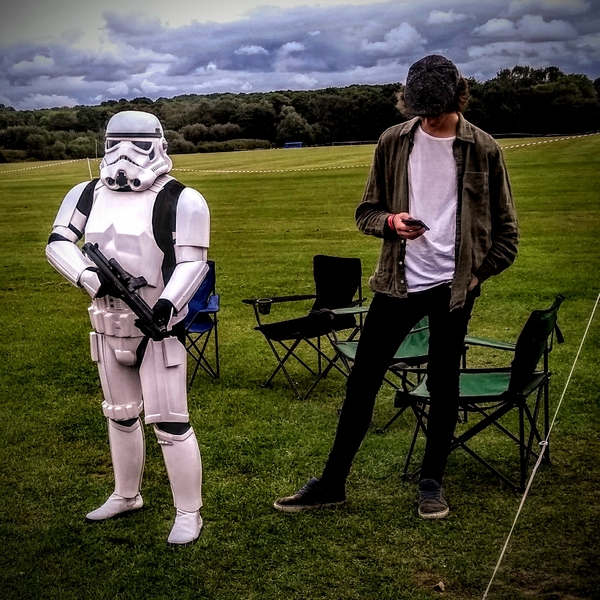 We put together a list of possible sites to check out; we found two that were full of potential although both would require some inspiring and challenging planning. However, one had a wedding booked so was not available. The other was Hurtwood Park Polo Club near Ewhurst in Surrey, not only was the site available on our dates but it had hosted outdoor concerts in the past and was already licensed for such events. All we had to do was adapt our event management plan to the new site and, as it was under the same council as Weyfest, we were not an unknown quantity to them which we felt would also help.

The site is run by Jayne and Kenney Jones so I didn’t have to go through explaining why a music festival would be a great event to have at their place, after all Kenney had played in The Small Faces, The Faces and The Who, so would know more about it than I did!

Now the real work began, we had just over two months to go and had to start all over again with the advertising, finding the equipment we needed to hire, measuring and mapping the site etc. We had the bands booked but we still had to inform them of the change of site and check this would fit well within their tour schedules. Most were delighted as it meant less travelling for them and maybe a night at home rather than in a hotel, but we had booked a few acts from the island which meant it was more of an effort for them. Luckily we only lost one of them but gained another from the island later so the connection with the Isle of Wight was not completely lost.

There were other island connections we were concerned about, we had booked some very colourful marquees from Ed’s Tents on the island which we thought rather special. Luck was on our side and he was able to supply these to the mainland. We also had a close association with The Island Radio that had been very good to us. We were very fortunate that the two presenters Clive Lewis and Tina Hyde who we had got to know still supported us and came to the festival to host the two main stages so all was well, or so we thought.

We contacted mainland suppliers, some of whom we had used before but found many to be low on supplies as they were booked elsewhere already. As an example, we had all the remaining toilets and fences that Site Event had – they pulled out all the stops for us. We went to Shorts of Basingstoke for wheelie bin and skip hire, and to cut a long story short we had to make do with less than we had originally planned. In the end we re-planned around what we could find, and were still sorting things during the site build week. 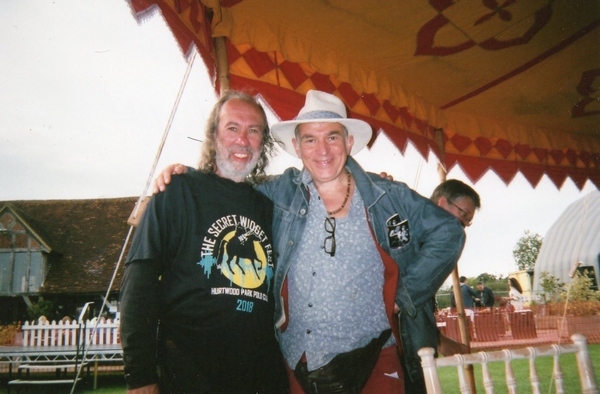 We decided to have two main stages outside and a smaller stage in the clubhouse. It was a tight fit getting all the acts to fit in as we had three full time stages on the Isle of Wight and felt the clubhouse could not operate quite the same as the third stage we had planned. We also had an earlier curfew but made some sense of it in the end.

Our glamping was supplied by Roger Brett who we had known for some years; he had supplied glamping tents for both the previous festivals and was happy to help in our new venture, including supplying tents for members of the True Deceivers and The Martin Barre Band who were playing sets over the weekend.

Dave Rees, a long time friend of mine, came on board to help us out wherever he could. We had run A New Day Records together as well as putting on occasional gigs, contributing to a few Jethro Tull Conventions and working on both the previous festivals. He is still running A New Day Festival as well as re-launching Blues on the Farm this year. This was a festival we both loved and were sad when it ended after 25 years. Dave put the programme together for us and will be more involved with the Secret Widget in the future – I’m personally pleased to be doing another festival with him. 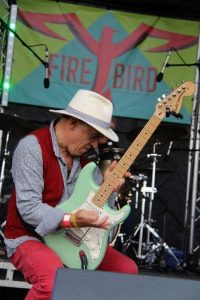 Coming to the mainland meant that I was able to include a Sci-Fi Zone which was something of a pet project of mine and is very popular at Weyfest; it never materialised at A New Day and was becoming difficult to organise on the Isle of Wight. Chris, Mark and Liz were able to step in after talking with them at Weyfest only a few weeks before and did a fine job bringing alien looking things and costumes from Doctor Who and Star Wars along – thanks guys! Next year a bigger tent is looking likely as several others will hopefully join them.

Advertising the event fell well short of what we usually hope to do with around 20,000 leaflets being distributed by ourselves and friends, mainly in the last four weeks before the event. We missed the deadlines for the music magazines but managed a few local papers and an interview on BBC Radio Surrey/Sussex.

We managed to get more of the usual stalls we expect to see and have become friends with over the years than we did at first, many of them being put off coming to the island by the costs involved in transportation.

Finally, when we arrived on site at the beginning of the week, five days before the gates would open on our debut, our crew started arriving and helped us get the site prepared. A few minor changes to the layout were done as we went along, not unusual at a new site, but it was now going to happen. We had our doubts at times but put them aside and we had finally got here. The build went well and we started to get a buzz as it got closer to the gates opening.

The site looked great and there were compliments from members of bands playing and the audience alike. The attendance was lower than we would have liked but given the short amount of time we had it was not surprising. 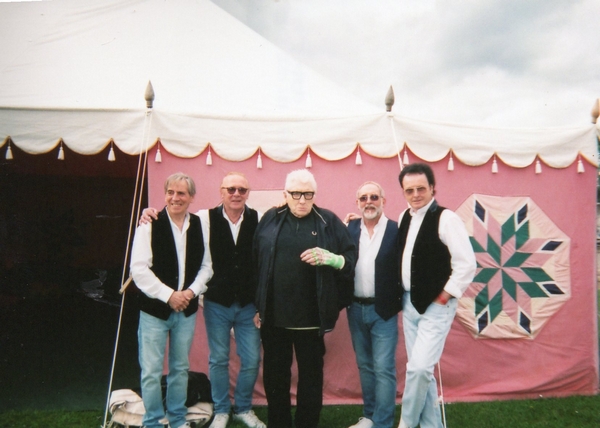 Friends I have spoken to at the festival and since have said that they were quite worried for me and didn’t think we would pull it off, indeed there were a lot of rumours going around about the festival not happening, but thankfully it did and it’s been great to see the many positive comments on Facebook and in reviews.

With the festival going so well I was sad to hear the news just before that Sam Spoons, the Bonzo Bills drummer, would be playing his last gig with the band at the Secret Widget before retiring through ill health. I had got to know Sam quite well having booked him several times at both the previous festivals over the years. I was told that he was determined to make the gig by fellow band members and they arranged for many surprise guests from his previous bands to come and join them on the last number. Sam was very moved by this and it made his last show very special for him. Sadly he passed away just 20 days after playing. I am honoured that even though he was so ill he still insisted on playing, this gave more justification to the work we put into saving the festival. RIP Sam. 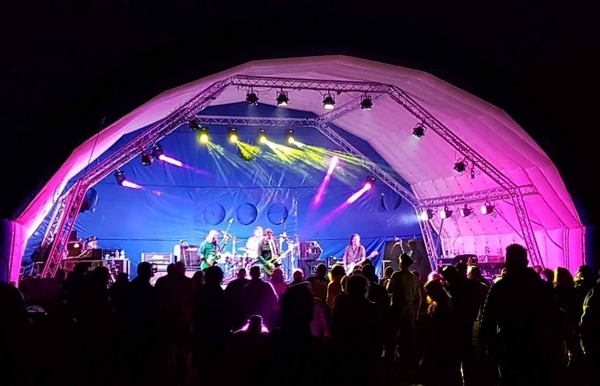