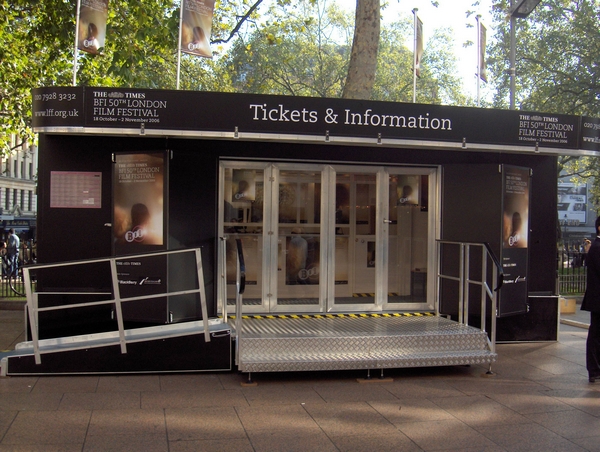 Description: An annual film festival running in the second half of October with cooperation from the British Film Institute

Details: Showmobiles has been delighted to work with the organisers of the London Film Festival over many years. Showmobiles were chosen to provide a mobile ticket office which was deployed on the pedestrian precinct at Leicester Square – right at the heart of London’s theatre land.

The units are able to provide self-contained outlets for ticketing and information services for the LFF’s events with a huge branding presence while at the centre of an extremely well attended tourist area.

The supplied trailers were modified to provide both steps and easy access ramps up to a low-floored ticket office. Further optional facilities have included on-board power, heating and air-conditioning, and a selection of other creature comforts including AV, furniture, galley facilities and a range of electrical services.

A different version was also provided at The British Museum as a ticket collection point for an outdoor cinema event.

Showmobiles can supply a selection of unit sizes ranging from small commentary boxes and registration points for smaller local events, up to larger expanding HGV vehicles which have been used as registration centres for travelling national events such as the Tour of Britain.

Feedback: Showmobile Services supports many varying events with a friendly and experienced transport team. Whatever your management requirements, the team at Showmobiles is happy to help. 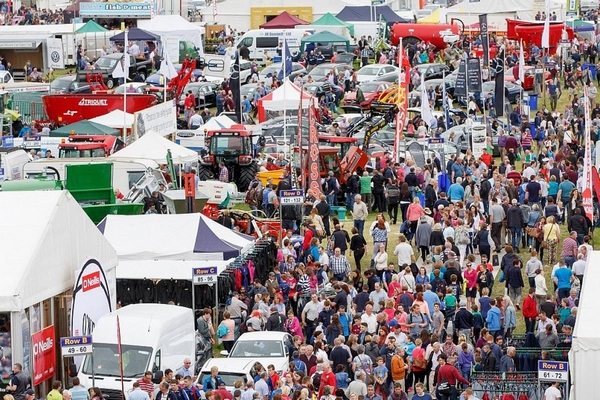 Description: One of Ireland’s largest agricultural shows, attracting an attendance of over 60,000 annually

Details: In considering a new ticketing solution, the Tullamore Show’s event committee had a range of concerns it wished to address, including the hosting of large volumes of cash on-site, long queues of customers waiting to purchase tickets and gain access, and how best to insulate the show from the economic impact of bad weather.

The biggest challenge was to scan tickets in real time across nine entrances on a remote 250 acre site without internet infrastructure. Future Ticketing plugged into the existing show website  and provided an easy to use pre-show ticketing experience in four simple steps. On the day of the event, attendees gained access with a printed eTicket or via a digital ticket on their smart phones. Tickets were scanned live via a mobile app and laser scanners, which can also be run off 3G mobile phone networks in areas of poor internet access.

Feedback: Freda Kinnarney, secretary of the Tullamore Show, said: “We are thrilled with the benefits that Future Ticketing has brought to the show’s ticketing and administration capabilities. Pre-sale online purchases grew exponentially with very successful early bird promotions, producing guaranteed revenues prior to the event. We intend to work more closely with Future Ticketing for our future shows.”