How can rural venues capitalise on one of the fastest growing sports in the country? Tally Wade asks Mark Leinster, CEO of the Obstacle Course Racing Association UK

Say ‘Tough Mudder’ and most people will think running, mud, obstacles and fun. But this is just one ‘brand’ of over 400 obstacle course races (OCR) held in the UK each year. The sport took off in the UK six years ago and is now considered the fastest growing sport in terms of participation in the country.

“The obstacle course racing scene is huge, and growing at a rapid rate,” says Mark Leinster, CEO of the Obstacle Course Racing Association UK (OCRA UK), an independent organisation that seeks to provide governance and regulation on the rules for competition within the UK industry. “Tough Mudder was a real springboard for the sport. We did a straw pole last year to get an indication of figures and found that there are around 5,000 hardcore obstacle course racers that are out every weekend, 60,000 people who attend one to four races in a year, and over 100,000 people we coin ‘bucket list’ racers – people who are preparing to race in order to cross the experience off their life achievements list. We are confident that participation will hit 250,000 by the end of 2017.”

These races have evolved from military training style courses, with a few pipes, nets and shuffle boards, to include some spectacular challenges including fire, ‘death slides’, 360 degree revolving monkey bars and, of course, extreme mud and water obstacles.

“Obstacle races have started getting really inventive, often with a theme,” says Leinster. “In Canada they have a 5km ‘foam’ race, and there are certainly lots of inflatables incorporated nowadays, even 8m towers for runners to jump off into giant air bags.”

The appeal of OCR racing is about pushing people out of their comfort zone. “The races are timed but it is definitely about personal challenge,” says Leinster. “Internationally, there are races where entrants see how far they can get in a 24 hour period, and often this is over 100 miles!

“Despite the nature of some of the obstacles (fire, barbed wire, ‘death slides’ where people hurl themselves off 18m platforms on a zip wire into water), we are often referred to as the ‘pink, fluffy unicorn brigade’. There is no better leveller than being face down in mud and you will see people who have never met before helping each other over walls. I have seen many relationships blossom in the mud. I think part of the mass appeal is that it speaks to the ‘kids’ in us all – climbing, being outside in the country, getting muddy – parents are cottoning on and more and more families are joining in as it gives kids a fun, physical challenge rather than being plugged into a computer game. There are some excellent children’s courses being designed now.”

A great ambassador for the sport is Sean Gash, a wheelchair user that people flock to help complete the courses. “Nicknamed ‘No Fear on Wheels’, Sean lost the use of his legs in a car crash. He will post on a forum that he is attending a certain race and could do with a little help and a crowd of people will turn up just to help him get round.”

We need courses!
So what could this friendly sporting movement mean for a rural venue or landowner? “There are currently around 400 races on the UK obstacle course racing calendar, but 80% of these are in the South East. The industry is desperate for new courses in The Midlands, Anglia, Cornwall, North Yorkshire, Central Scotland and the Highlands. If landowners in these areas want to host a race, they are sure to get interest as there is nothing that excites a racer more than a new course to get stuck into. Every time a new race comes up, everyone goes to check it out. How much repeat business that race gets all depends on the quality of it.”

You will need around 300 acres of diverse land for the average 10km race and the associated car park and race village. “It is possible to host a 5km ‘lapped’ race on less land,” says Leinster, “but either way you need to make sure you are prepared to allow thousands of people to run round it.”

Courses will have much in common with traditional cross country races in that they should include undulating terrain, natural features, and different ground cover (gorse, woodland, heath, open fields and water), but need to be able to cope with up to 5,000 entrants!

Business models
There are two main ways a landowner can get going in the OCR industry. Either by teaming up with an existing race director to host a race or by setting one up themselves, usually with the help of a consultant.

Teaming up with a promoter
“One of the largest fees a race director will have to pay is the fee to the landowner. Lots of owners are cottoning on to the increase in demand for land and where 10 years ago they might charge 10-20 pence per runner, today it is not unusual to charge £1.50. One of the highest fees on the UK scene is £7 per head plus extra for car parking, which the venue then keeps,” says Leinster. “Alternatively you can agree a fixed fee for the hire of the land per race, say £5,000.”

As far as the course itself goes, if a landowner is working with a race director to promote the race, the race director will take care of the design and construction of the course. “It is not unusual for the construction of the course and the preparation of the first race at a new venue to cost £80,000 to £100,000. Then £20,000 to £30,000 to run every race subsequently,” says Leinster. “It is usual therefore to have at least a two year contract in place, for say two races a year.”

In terms of attracting a promoter to your land there are a couple of things that can really help. “The first thing I would advise a landowner to do is to go onto Google Earth and mark the boundary of their land, then push it out to promoters via the many forums the OCR industry has online,” says Leinster. “There are about 100 individuals and companies promoting races in the UK. Another good place to find them is via Companies House – just search Obstacle Course Race.

“If a landowner wants to score brownie points, offer to help with the course build. If you are prepared to help and make any equipment available on a day rate it will help a promoter. Having the machinery on-site will make it cheaper for them than having to go to a commercial operator.”

Going it alone
It is perfectly possible to create and promote your own race but it would be sensible to get help from an independent consultant to guide you and look after your investment. It is a riskier way to go but the rewards could be great. “In the first year you might be able to charge £35-£50 per ticket,” says Leinster. “While established races can achieve £60-£80 per head, racers won’t spend that much on an untested course. That said, you are likely to get the numbers. As I mentioned before, a new course is a huge draw and you should expect lots of people to turn up as they will want to check it out. Providing your course and race event is a success you can hope to achieve around £70 per ticket in subsequent years.

“You don’t want to put all the effort into creating a course only for it to be used once a year. I usually suggest holding two races at least – Summer and Winter, although you could go to four to maximise on your investment.”

A successful event obviously needs innovative course design, great promotion, a thorough health and safety policy and infrastructure that works. “You need to provide value for money for the racer’s ticket,” says Leinster. “Go to other events and see what works and what doesn’t, visit the forum and get to know the things that matter to racers. This is where a consultant is worth their weight; they have all the experience you may lack and can help you get it right first time. They may also bring ideas to the table that you or other race promoters may not have thought of.

“Another revenue stream that can be available year round is OCR training. If you have a spare barn, then why not put a few training elements in it and create a training venue? You could also make your course available for people to use outside of the actual races and use this as a unique selling point – ‘train on the course you can then race on four times a year’.”

Although there are enough races in the UK now that the devoted racer could attend two in a day (yes, there are people mad enough to want to do this), many of these races are owned by the same promoter, and the time could be right for some new blood. “There is definitely room for new races, and certainly in areas outside of the South East – we are crying out for more! As people enter at the rate anticipated, demand for fresh new land and races will only increase, so it is a great opportunity for landowners to become involved,” says Leinster. 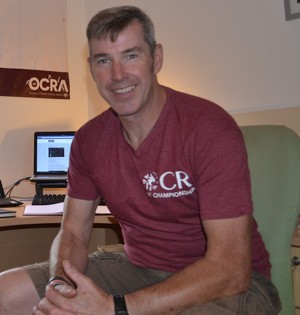 About the Author
Mark Leinster is the CEO of the Obstacle Course Racing Association UK and a consultant to the industry in the UK and abroad. He is also a course designer, race MC and passionate race participant. Contact Mark at info@ocrauk. org.uk