The restoration of a traditional hay meadow has been a labour of love but is now an essential part Swallowfield Glamping Retreat, writes owner Denise Hobbs. 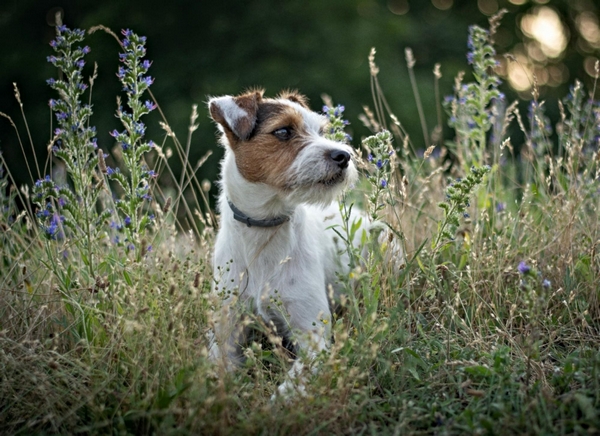 In the UK, we’ve lost over 97 per cent of our UK wildflower meadows since the 1930s. Here in Worcestershire we have almost one-fifth of England’s remaining flower-rich meadows and pasture and Worcestershire’s Coronation Meadow, Far Starling Bank, is just one mile away from our site.

When we moved to the farm, we were given a copy of an old Tythe map dated 1813 which showed that historically our land had once been large stock orchards and traditional hay meadows. When my great grandfather purchased the smallholding back in the 1920s, the large stock orchard had been replaced by a much smaller orchard, but the flower-rich hay meadows remained. He kept livestock and continued to manage the meadows traditionally. At that time the farm was a haven for wildlife and full of biodiversity.

A neighbour recently told me a lovely story about my grandfather. Back in the day, Worcestershire held an annual hay competition. The competition aimed to find which local farmer had grown the best quality hay and was quite a prestigious event. My grandfather was up against much larger farmers who were using new modern farming methods, including the use of herbicides.

Unperturbed, and one for the underdog, he decided to enter a sample of the small farm’s flower-rich hay where meadow management had changed very little over the years. And yes, you’ve guessed it, he won the award for best quality hay! He would have found this highly amusing and I’m sure celebrated with a good drink of homemade cider in his drinking horn. 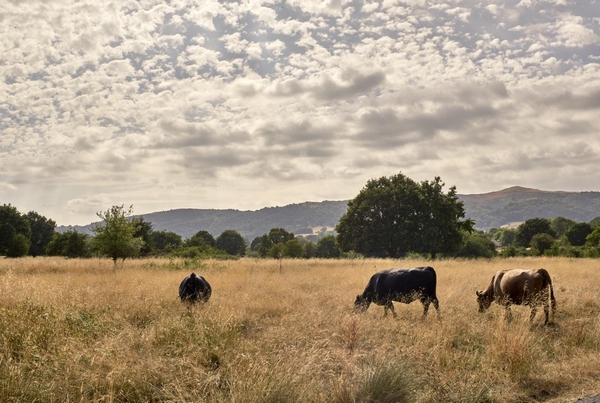 Biodiversity gain
When we embarked on creating the glampsite, we aimed to achieve a biodiversity gain. Over recent years the land had been semi-improved, which meant that it had been modified by artificial fertilisers, slurry, grazing, herbicides, and drainage. Consequently, it was less natural and had a less diverse range of species than the previously unimproved species-rich meadows of my great grandfather’s time.

On hearing that we had lost over 97 per cent of our wildflower meadows since the 1930s, and knowing the farm’s previous meadow history, we decided to restore the wildflower meadow and stock orchard. This meant delaying our planned opening for the glampsite by a year, but we felt it was a sacrifice worth making.

So, in 2018 we commissioned Worcestershire Wildlife Consultancy to produce a Biodiversity Enhancement Plan for our new glampsite and the wider farm. Not only was the plan to enhance our own biodiversity but our local area is a Worcestershire Wildlife Trust Living Landscape area. The trust’s intention is to create links between existing habitats, restored habitats and newly created habitats as well as benefitting the local community. Our proposed enhancements would assist them in this wider goal.

The plan involved scoping what we already had and then looking at ways we could enhance biodiversity. One of the goals was to create new habitats, and we could achieve this by creating a new wildflower meadow. Meadows are of great benefit to a diversity of species and are attractive to humans, so it ticked all the boxes for our first biodiversity project. 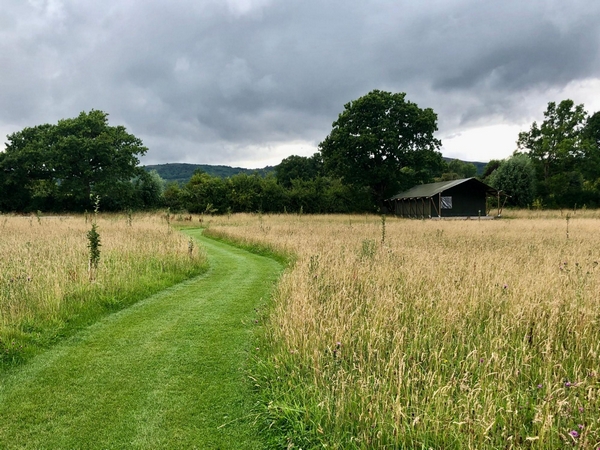 Back to bare earth
To create a successful wildflower meadow, we had to lower the soil fertility to reduce the dominance of coarse grasses and herbs. Although dramatic, the best option for us to ensure success was to invert the topsoil to raise the less fertile subsoil to the surface and to provide open conditions suitable for seed distribution.

We achieved this by ploughing and then tilling the three-acre site. I must say, being faced with a blank ploughed field initially filled us with doubt, hoping we had made the right decision! Luckily, we have very experienced local farmers who reassured us it would be fine. It’s quite incredible how quickly land can recover.

This also gave us a chance to lay our site services and we used the spoil from the trenches to create a raised path around where the glampsite would be situated. This has become the area we mow on a weekly basis for access and to keep guests’ feet from getting muddy in wet weather. 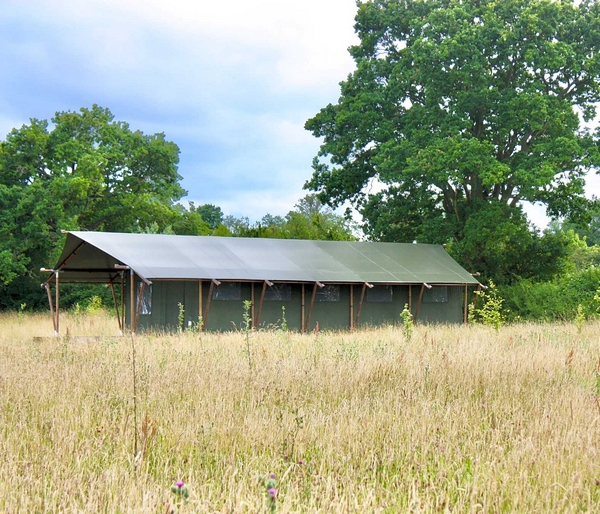 Next, we needed to choose the correct wildflower meadow seed mix not only for our land but for our area. We contacted Emorsgate Seeds who are specialist growers of wildflower and wild grass seeds for advice. We chose a 30-species meadow mixture for clay soils mixed with a small amount of meadow mixture for wetlands to tackle the areas that can lie damp in the winter months if there has been lots of rain.

So, in Autumn 2018 the seed arrived ready for sowing, and the land was ploughed, tilled and sown. It’s quite a difficult task to sow wildflower seed in such a large area as it’s too large to hand sow but the seed is very fine and not ideal for the typical tractor-mounted seed spreaders. The only way to do this is to tractor sow the seed at great speed. Our very talented local farmer did a great job whizzing around the field to distribute the seed evenly.

Then we waited, not too long as it happened. In November we could see the seeds had started to germinate and the newly sprouting grass looked like an emerald carpet. Most newly sown meadow wildflowers and grass species are perennial. They are slow to germinate and grow and usually do not flower in the first growing season. It is said that it takes at least three years for wildflowers to establish themselves. 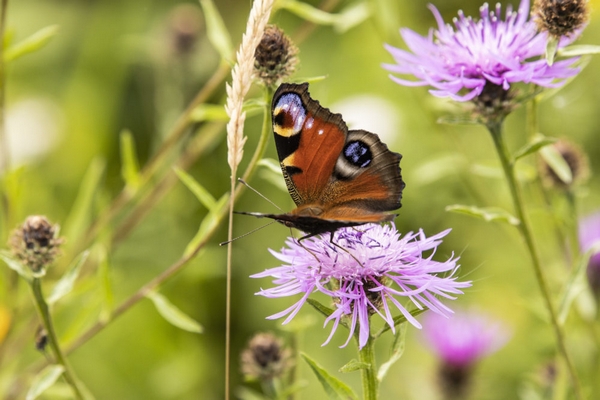 After completely ploughing the land and sowing the wildflower meadow, it was clear that we had to allow at least another year for the land to recover and the meadow to establish. So, our opening plans were put back again to April 2020. However, this allowed us to plant the first phase of the traditional orchard in the spring of 2019.

We planted 50 new apple trees that would act as screening between the glamping lodges, along with some hazel and hawthorn that would mix in between them. Working with Walcot Organic Nurseries, we chose old historic organic varieties local to our area such as Pitmaston Pineapple, which has small golden-yellow apples, perfect for children, and has a heritage dating back to 1785.

The trees will act as an edible orchard forest that can be picked and eaten by our guests and will be varieties they probably have never tasted before as you will not find them in the supermarkets.

Worth the wait
In the spring, it was so exciting to see the yellow rattle flowers developing. Yellow rattle is especially good for establishing wildflower meadows as its roots develop underground and seek out the roots of plants growing nearby, especially grasses. Once contact is made, the yellow rattle draws water and nutrients from them, suppressing the growth of grasses by as much as 60 per cent and allowing wildflowers to flourish.

In the first year, the new wildflower meadow started to establish and the wildflowers themselves became evident alongside beautiful meadow grasses such as common bent, meadow foxtail, red fescue and cat’s-tail. Meadow grasses tend to be finer and shorter than coarser grasses so that they do not dominate wildflowers. 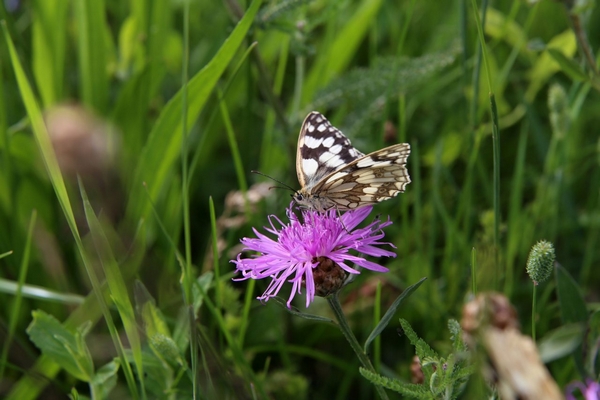 But what we hadn’t bargained for was a whole new level of noise! I’m talking good noise! A noise that hadn’t been there before. The delightful sound of grasshoppers and crickets chirring away and the contented buzz of bees and hoverflies collecting pollen and nectar – the sound of a summer wildflower meadow.

The biggest surprise in that first year was the arrival of the marbled white butterfly to feed on the field scabious and the knapweeds. The meadow has become a haven for butterflies including the meadow brown, gatekeeper and common blue who are all regular visitors and are increasing in numbers year on year. The peacock, tortoiseshell, brimstone and red admiral butterflies are often spotted around the wider area of the farm.

Then Covid-19 struck which has been so devastating for everyone. We made the difficult decision to delay opening the glampsite again until April 2021. However, not ones to give up, in true British style we “kept calm and carried on!” So, we got on with planting the cider apple orchard in the centre of the glampsite.

Working with both Walcot Organic Nursery and our local community orchard, Colwall Orchard Group, we chose local historical and organic cider apple varieties dabinett, Harry Masters Jersey, Kingston Black and Yarlington Mill. We planted these in early spring 2020, and we are looking forward to creating our unique blend of cider in the years to come.

In the meadow’s second year, it completely changed again with many more wildflowers appearing including yarrow, betony, birdsfoot trefoil, ragged robin, selfheal and oxeye daisies. It’s been such a joy to watch the meadow transform through the seasons offering different wildflowers at different times of the year. 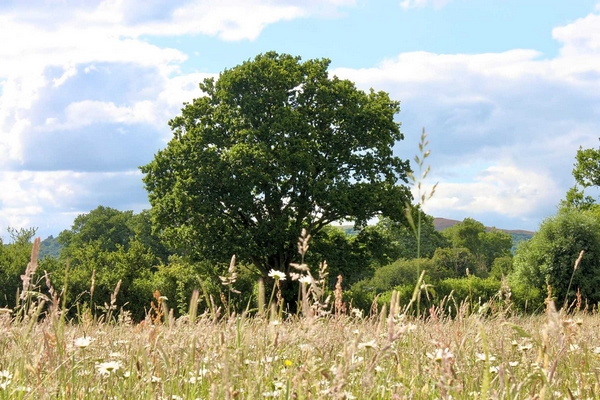 By adopting the traditional meadow management method, based around the main summer hay cut in combination with autumn and possibly spring mowing, the meadow itself manages future sowings. The meadow grassland is not cut from spring through to late July/August to allow the species to flower. After flowering, we take a ‘hay cut’ using a tractor and a flail collector, mowing the grass to roughly 50mm. The cut hay is then removed and given to a local farmer who feeds it to his cattle.

It’s been a labour of love creating the wildflower meadow but it has been an essential addition to the farm, making a beautiful space for ourselves and our guests to enjoy and learn about nature and our amazing insects.

We love early morning walks in the meadow with Dolly, our parson russell terrier, when all is quiet apart from the crowing of the cockerel and evening walks in the late summer glow, watching the swallows in flight across the orchard meadow, swooping and diving in pursuit of insects. It truly is a special place to be! 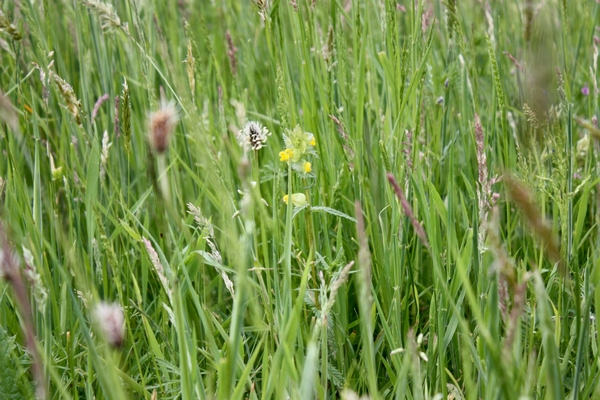 About Open Air Business 1073 Articles
The voice of outdoor hospitality - in print and online. If you liked this article, subscribe to the printed magazine here. We produce industry e-news between issues - please sign up here