Design fans, this one’s for you! Open Air Business takes a look at the finalists of the UK’s first glamping design competition

In September last year The Epic Retreats project posted a tender competition calling for “high quality, self-contained glamping accommodation units” that would be developed to form a ‘pop-up’ hotel. They would appear in three different locations in Wales this summer.

The competition was conceived by a partnership between holiday cottage finder Best of Wales, Cambria Tours and George + Tomos Architects. Part funded by the Welsh Government’s Tourism Product Innovation Fund, one of its main objectives was to “draw attention to Wales’ wealth in terms of landscape, character and crucially, its legends” in line with tourist board Visit Wales’ 2017 £5m global Year of Legends campaign.

The competition was originally posted on the Welsh website Sell to Wales, a portal where public tenders are listed. It was picked up from here by the architectural press and 48 entries were received from all over the world. “We had designs from Zimbabwe and a winning design from Australia,” said Llion Pughe, director of the project’s lead partner Best of Wales. “We had originally stated there would be three winning designs, but the quality was such that we ended up with eight.”

The brief called for designs inspired by the theme ‘Welsh Legends’ and that made use of Welsh materials where possible, with a build cost of no more than £11,000. Each had to feature a chassis so they could be easily moved, and include a king size bed, luxury shower, compost toilet, wood burning stove, hob, seating area and solar panels. The winning designers received £1,500 to take the plans forward.

In February, the locations and dates of the pop-up hotel were announced. The units will appear in West Wales from 5 June to 3 July, the Llŷn Peninsula from 10 July to 7 August, and Southern Snowdonia from 14 August to 11 September. Over 200 bookings will be made available for the season through www.epicretreats.wales

“After the summer season we hope all the designs will find a permanent home together,” says Pughe. Each design team will retain the copyright to their structure, so who knows? Perhaps these truly inventive and beautifully imagined creations will be available to other glampsites sometime in the future?

Chassis size (no more than): 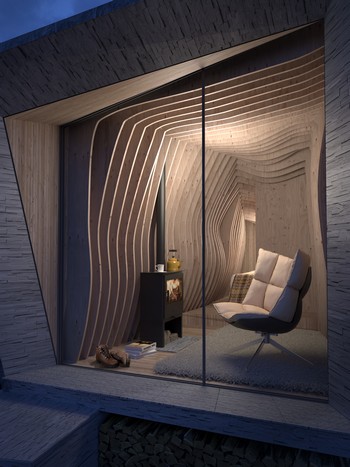 The design team says:
“This design is inspired by the legend of King Arthur and a cave where he and his knights slept while travelling – it is said it could be discovered once but never again.

“Locally sourced sheep’s wool insulation will be placed within the panels to provide a high level of thermal insulation. The build benefits from a full width sliding door to offer panoramic views of the Welsh landscape.” 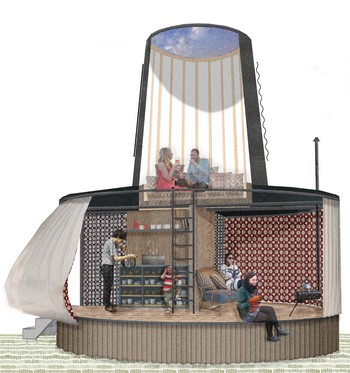 The design team says:
“This unusual structure is inspired by France’s failed attempt of a British invasion through Fishguard back in 1797. It is said that as the French began their assault, hundreds of local Welsh women came to witness the fighting between the French and the local militia.

“Dressed in their traditional scarlet tunics and tall black hats they were a formidable sight and at a distance may have been mistaken for British army Redcoats – suffice to say the French didn’t stick around for long.

“A king-sized bed fits within the upper floor of the hat and the domed roof allows for stargazing opportunities.” 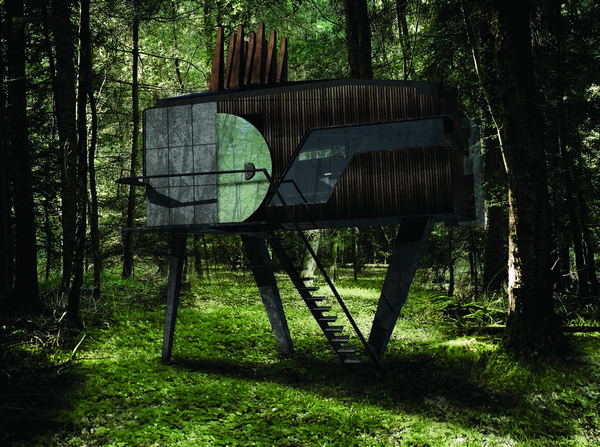 Cabin in the Woods
By Francis & Arnett, Carlisle

The design team says:
“This nature-inspired building sits on legs high above the ground and explores the theme of the ‘animated forest’ shaping the Welsh landscape. Inspired by the poem Cad Goddeu, meaning ‘battle of the trees’, from the medieval Welsh manuscript known as the “Book of Taliesin”, the unit will be developed to give the impression of movement.

“Its highlights include a padded sleeping area and a stove area with featured chimney above, as well as a box window designed to catch the morning sun to wake travellers naturally. It will use raw materials derived from the Welsh landscape including timber, steel, slate and leather.” 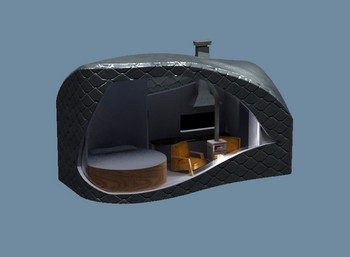 The design team says:
“Inspired by the legend that is the Welsh dragon, this eye-shaped pod could fool passers-by into thinking such a creature was hiding in the great outdoors.

“The walls will be covered with stainless steel shingles resembling a dragon’s scales. The cabin features a wet room and Hungry Penguin wood burner for cooking and heating.” 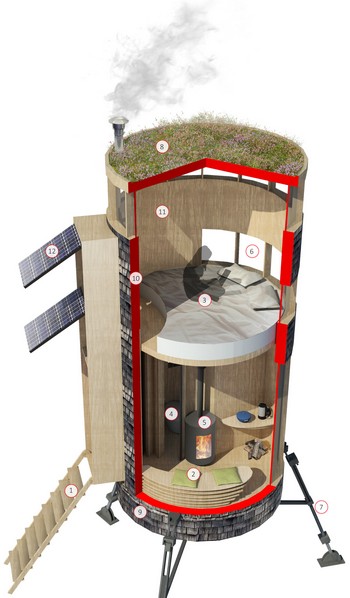 The design team says:
“This vertical unit celebrates the best Wales has to offer. The three prongs represent the dragon’s foot. The overall design is inspired by Wales’s famous industrial past and the steel door displays the country’s iconic Celtic knotwork.

“The layout features a sleeping area upstairs and panoramic glazing at both levels provides for magnificent views across the Welsh landscape.”

The design team says:
“This cabin is a tribute to Wales’s mining industry – a Welsh legend that spans generations and landscapes across the country.

“Visitors are invited to enter the cabin by crawling through a small tunnel, allowing them access into an angular corridor space only lit by borrowed light. From here they can follow a glow of light from the main space which extends to the full available height, with large windows that provide scenic views of the great outdoors beyond.

“Visitors must return into the tunnels to discover the washroom and to climb a flight of steep steps to the sleeping area, from where they can enjoy panoramic views from their bed.” 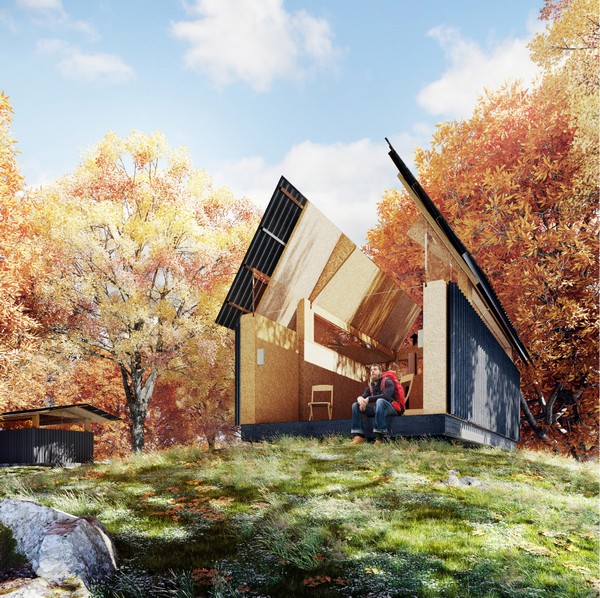 The design team says:
“As a country, Wales has the highest percentage of sky designated as an ‘International Dark Sky’ area making it one of the most outstanding places in the world to stargaze. The SKYHUT is designed to provide a unique place to experience the sky, taking its inspiration from Cadair Idris where legend states that travellers sleeping out under the night sky awaken as madmen or poets.

“The tradition of sleeping out under the night sky is manifested in the roof with a simple geared cable system borrowed from proven sailing technology, allowing it to open fully. With the doors open too, the SKYHUT can be configured as a glamping-observatory.” 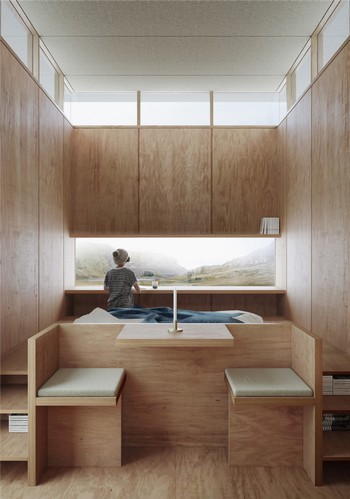 The design team says:
“Inspired by the Welsh landscape, this cabin is based on the material Wales is built on, and of – slate. Slate Cabin is the perfect place to experience the silence and solitude of the Welsh landscape. This place of retreat is designed to reinvigorate those who stay there.

“Drawing upon the restrained elegance of Japanese and Danish design, the space is almost monastic in its use of simple, minimal materials. The cabin is clever and compact, with a built-in table that’s perfect for two and a raised bed platform for rest and relaxation. Natural light bathes the space, and a pot-bellied stove brings warmth and cosiness. At one end of the cabin, a seat and desk frame a picturesque view of the Welsh landscape. It’s the perfect spot to sit with a cup of tea and a book.

“Slate Cabin is an escape from the everyday, and is the ideal place for waking up to the quiet beauty of rural Wales.”