How brothers Kris and Darrel Morgans created The Roost Merthyr Tydfil, a purpose built haven for hikers, bikers and lovers of the outdoors, in their childhood stomping ground. 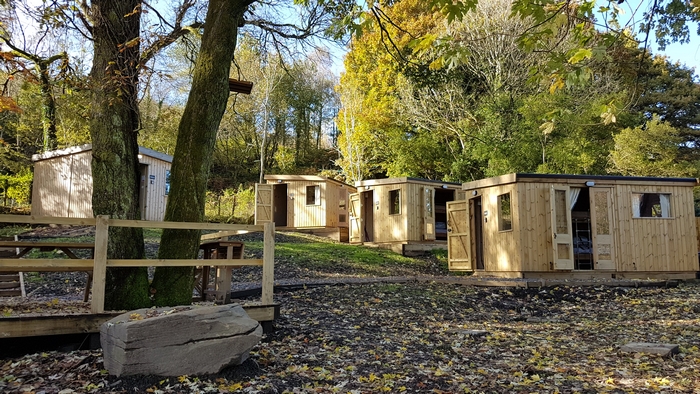 With the growing market for activity tourism in South Wales, brothers’ Kris and Darrel Morgans saw an opportunity to develop some overgrown land at the back of their childhood home.

Ash Villa is situated in the village of Troedyrhiw on the outskirts of Merthyr Tydfil in the South Wales Valleys. The village has a rich industrial heritage linked to the extraction of coal and iron ore in the 19 Century. Built in c1830, the house and the neighbouring Dynevor Arms public house originally formed part of a terrace of cottages facing the historic Glamorganshire canal, which was used for transporting industrial goods from the Valleys to Cardiff docks.

“As children, the land was our playground; home to games of rugby, cricket and a DIY BMX course,” says Kris. “Nearby Gethin Woods (now home to BikePark Wales) was our extended playground and we explored the mountain on foot and on two wheels – though we were into motocross rather than mountain bikes.

“The site is an acre of land nestled in a natural bowl with panoramic views of the opposite valley. It has a stream running along its rear boundary and is surrounded by trees, but it had become very overgrown.”

It is ideally sited halfway along the Taff Trail (cycle route 8 which runs for 55 miles from Cardiff to Brecon) on the edge of the Brecon Beacons National Park and just a mile away from the popular mountain biking trail centre, BikePark Wales. 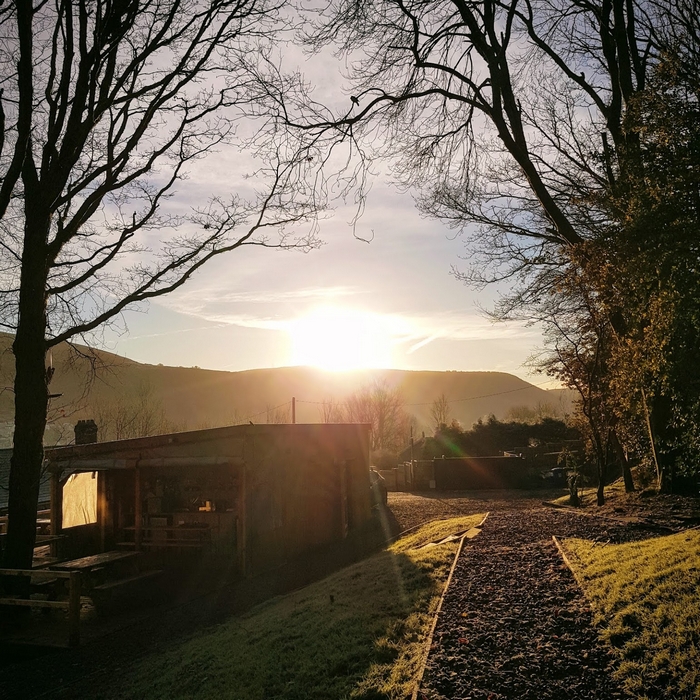 Research
Activity tourism is big business in the region. The Merthyr Tydfil County Borough Council Destination Management Plan 2016-18, states: ‘The region is fast becoming a hub for activity tourism and is well on target to becoming one of Wales’s most desirable regions in terms of adventure tourism.’

“Visitors to the area are coming to take part in activities including mountain biking, cycling, hiking, fell running, rock climbing, sailing and more,” says Kris. “BikePark Wales attracts c.75,000 visitors a year and these numbers are increasing year on year.”

Merthyr Tydfil has a few hotels, B&Bs, a single campsite and an increasing number of houses being used as holiday lets. The area was crying out for purpose-built accommodation tailored to the needs of the many visiting outdoor adventurers so Kris and Darrel decided to take advantage of the gap in the market.

“The plan was to offer comfortable yet simple accommodation with shared facilities including hot showers, decent cooking facilities, secure parking and plenty of secure storage for equipment (mountain bikers and cyclists often spend thousands on their bikes),” says Kris. “We also felt it was important to include a drying room as adventuring can be a soggy business!”

Patience, passion and planning
One of Kris’ oldest friends was the architect for the scheme, Warren Williams of London based Studio Cherry. Warren also grew up in Merthyr Tydfil and was keen to get involved in the brothers’ new venture as it chimed with his love of the outdoors and Studio Cherry’s interest in heritage and eco-friendly design.

“Warren developed the brief, reacquainted himself with the site and worked with us to prepare an initial design strategy. Inspired by the semi-rural site, we came up with timber clad, green roofed ‘eco-cabins’ and a wash block arranged around a gently meandering path through the existing trees.” 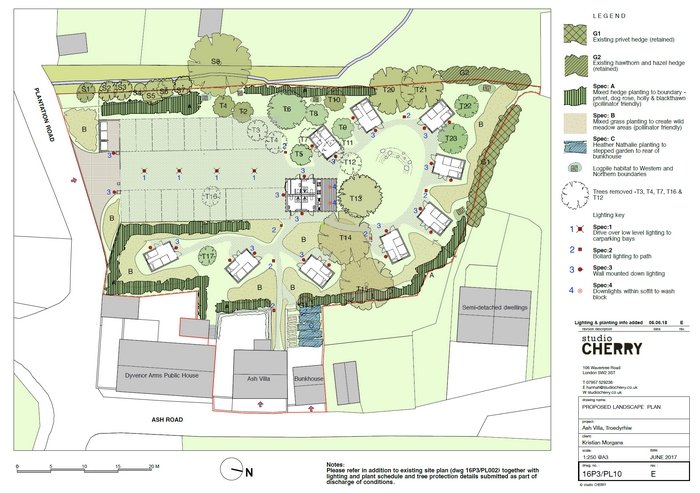 Plans also included the sensitive extension and refurbishment of the main house and outbuildings to create B&B style rooms and a self-contained bunkhouse respectively.

Sustainable environments should take into account the social and economic context, in addition to energy use, so part of the brief included the support of local business, labour and materials where possible.

With regards to energy use, a ‘fabric first’ approach was adopted where the cabins were designed with compact forms and high levels of insulation to limit heat loss (and allow for their occupation for most of the year) and the existing family home would be retrofitted. A strategy augmented with photovoltaic panels and rainwater used to flush the WCs.

“Landscaping was also important,” says Kris. “We used it to enhance the natural beauty of the site through the planting of local species, native hedging and undulating earthworks integrating the buildings to their surroundings and creating a series of private and more public spaces lined with subtle lighting. Non-human guests are also be encouraged to stay in bug hotels together with bird and bat boxes.”

Warren felt that it was important to involve the planners at an early stage to open up a dialogue and test the viability of the scheme in terms of policy relating to land use, scale of development, massing and amenity overlooking.

A series of hand drawn sketches including plans, sections and 3D views were prepared for a pre-application planning meeting and fortunately were well received by the planners. Following this, the Roost could proceed to planning with greater peace of mind and Warren could evolve the masterplan, fleshing out the details of landscaping, servicing, utilities, phasing and the appointment of other consultants such as the ecologist.

Planning was gained in April 2018 for nine cabins, a wash block, refurbishment of the existing Ash Villa and extension of the existing garage into bunkhouse accommodation, not too dissimilar from the original reapplication scheme. 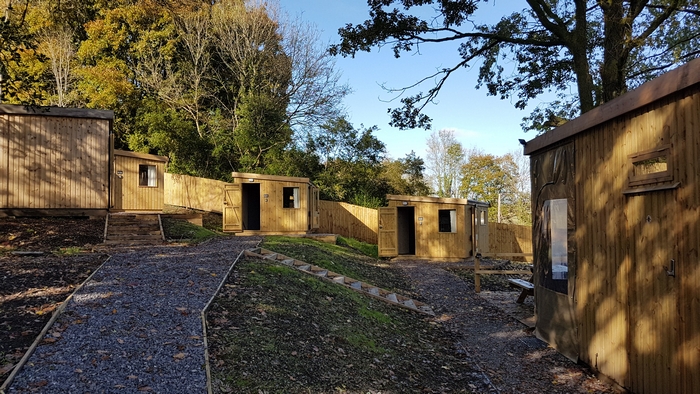 Bespoke cabins
The brief for the accommodation was for a structure that could sleep four people comfortably with living space and bike and equipment storage. The team researched a variety of ‘off the shelf’ options for pods and cabins, visiting a number of suppliers and exhibitions but struggled to find anything that fitted the brief so they decided to go bespoke. They chose a local company that specialises in bespoke timber structures for the manufacture of the cabins.

“A big consideration was bike storage,” says Kris. “Visitors to the area, staying in a well-known budget hotel nearby, were paying additional cleaning costs so they could take their bikes into their rooms with them. It therefore seemed important to provide each cabin with its own secure bike/equipment storage area.”

After much research of ‘tiny houses’ online, the team initially came up with a design that incorporated a mezzanine floor and bike storage underneath but this was deemed too high at pre-planning when it was confirmed that the maximum height for the cabins could be no more than 2.5 metres, so they went back to the drawing board.

The build
The process of taking the land from the overgrown space that it was to the Roost as it is today took time. Darrel, a civil engineer, designed the foundations for the cabins and the wash block. A local team of building contractors were employed that Darrel had worked with previously and the required services also had to be brought into the site. The outdoor work was at times delayed by wet and icy weather.

“The cabins were built off-site and reassembled in situ where they were insulated and boarded with OSB,” says Kris. “Lighting and heating were added and the simple interiors designed to be comfortable and easy to maintain. The storage porch has a washable floor so guests can hang up their bikes and dirty gear without worry. Super comfy four foot wide bunk beds are spacious for one and cosy for two.”

Once the build was complete, the land was seeded with grass and wildflowers, and native bulbs and hedging were planted in and around the site boundary – over 800 whips in total. 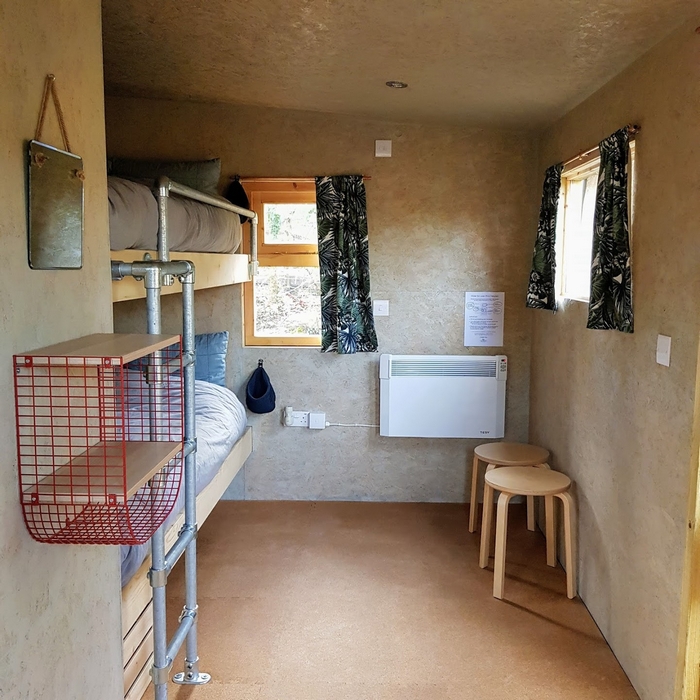 Settling on the Roost
“Initially the plan was to call the site Plantation Pods as it was located just off Plantation Square but, with the move away from pods to cabins, this needed a bit of a rethink. We settled on The Roost Merthyr Tydfil. A roost being a place for sitting, resting or lodging, plus the site is home to lots of birds and a roost is a mountain biking term (meaning the mud and dirt that flies up behind the bike after a rider goes into a corner).”

Kris’ wife, Kath, who is responsible for marketing and design at the Roost, set about coming up with ideas for the logo and branding, trying the DIY approach to begin with. With these designs not quite cutting the mustard, she approached a graphic designer who was within their target market (a mountain biker) and had produced other designs that appealed. The result is a modern, hip and eye-catching logo and brand that is reflected in the Roost’s self-built website and all other materials.

Making the Roost known
Having a strong online presence has been important from the start and marketing has revolved around the Roost’s website, social media, Google advertising, listing on Airbnb and on relevant websites including Visit Wales, Visit Merthyr, BikePark Wales, MB Wales and dog friendly accommodation sites. Guests can book directly via the Roost’s website using FreetoBook or via Airbnb and Google Hotels.

From the outset, Kath and Kris liaised with the local council’s Destination Management team. This helped in the planning process and with the ongoing promotion of the business. Kris and Warren were invited to speak at the council’s 2019 destination management event about the Roost’s journey and future plans. Kath and Kris also attended Visit Wales events which led to a site visit and its subsequent grading the Roost as a Visit Wales’ Quality Assured Glamping Site and accreditation for its Cyclists and Walkers Welcome scheme.

“The concept of the Roost fits perfectly with Visit Wales’ 2020 plans to celebrate the outdoors in Wales (OAB, December 2019),” says Kris. “The Roost is also making itself known locally and, where possible, we have chosen to work with and support local businesses. We encourage our guests to do the same.” 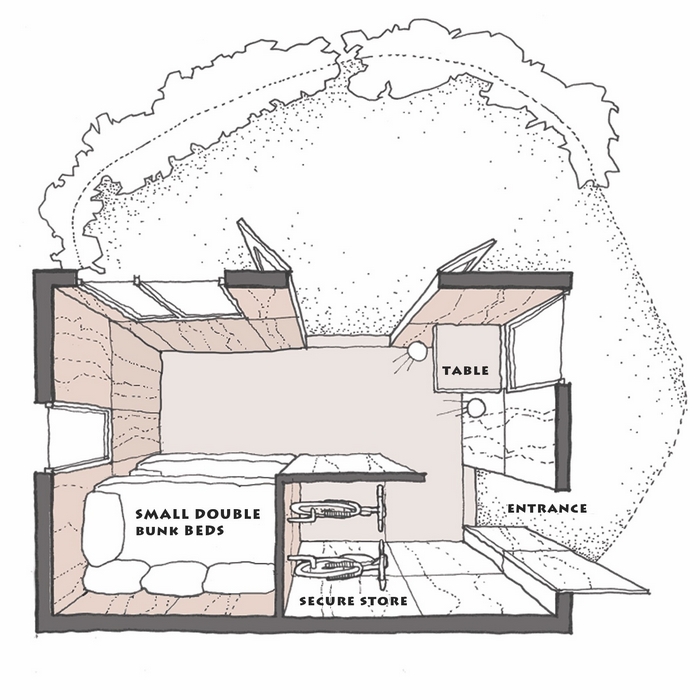 The proof is in the pudding
After test driving with groups of mountain bikers and friends, the Roost launched. Feedback from guests has been very positive with useful suggestions. Guests are also asked to leave reviews via the booking site and/or Google.

“We had a great stay at The Roost and can’t wait to return. The cabins are thoughtfully designed and beds extremely comfortable. The cabin was cosy and warm even in the January weather,” said Chloe, Bristol. “A little gem nestled in a Welsh hillside. Brand new shared facilities and the kitchen! Best camping kitchen ever,” said Scott from Preston who stayed in his campervan with his son.

Having opened in October 2019, bookings are looking positive for 2020 with most weekends in quarter one already booked up.

The future’s bright
With the Roost still a fledgling, there are plenty of opportunities for it to fulfil its booking potential. On site there are plans to install solar panels on the facilities building and green roofs on the cabins. There’s still some landscaping and planting to be done and, with the opportunity to add more cabins and the planning permission for the conversion of Ash Villa and the garage into a bunkhouse, the Roost has a great deal of future potential. 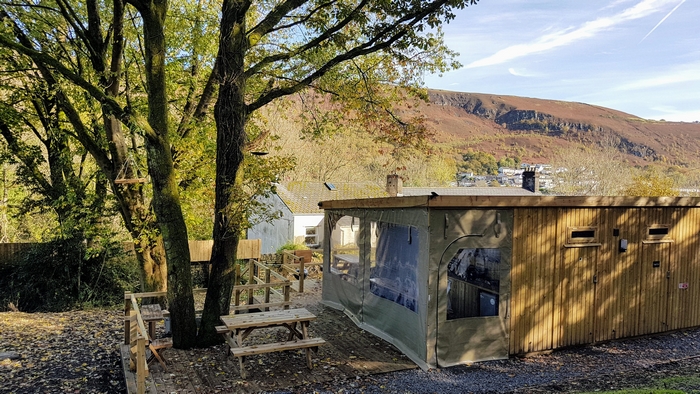