An interview with the winner of Channel 4’s Cabins in the Wild, a television series following the eight finalists of the Epic Retreats project in which designers created accommodation for a Welsh pop up glamping hotel 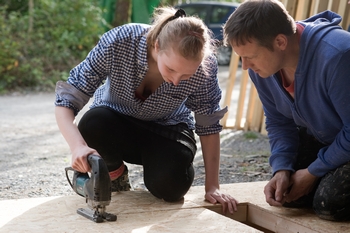 
Favourite tipple: I am usually a lager drinker, but now and then cider

Cats or dogs? Neither


Something people may not know about you: I was lost at sea

Carwyn was one of the eight Epic Retreat project finalists. Designs were chosen through a competition tender part funded by Visit Wales to support its Year of Legends 2017 campaign (see May issue of Open Air Business). The eight cabins form a unique pop up glamping hotel in three Welsh locations this summer. The building and siting of the cabins was made into a Channel 4 television programme that aired in May, presented by Dick Strawbridge and Will Hardie. Carwyn’s Dragon’s Eye was chosen as the programme’s overall winner. For more information or to book a stay in one of these amazing structures visit www.epicretreats.wales

How did you get started in timber frame design?
I’ve always had an interest in using timber since primary school. I wanted to be an architect but didn’t want to spend more time in school and then university, so went to college to learn carpentry and joinery. Getting to design and build things was my main goal, and it’s really good fun. I may not have gone about it in the conventional way but learnt an awful lot on the way and am still learning.

What is the history of your relationship with the Centre for Alternative Technology (CAT)?
I’ve known about the centre since I was in school and visited a few times. If ever I had time I would pop in to see what was going on and almost definitely buy a book or two. In 2011, I applied to be the maintenance manager, in which I was successful. After three amazing years I decided to go back on my own, which was a really hard decision. However, in those three years we had come up with a few courses which I still run today and I have also built a few of the display buildings on site.

How did you get involved with the Epic Retreats project?
I found out about the project online through the Sell to Wales website. The tendering process was set as a competition and I was chosen as one of eight to go on to build a cabin.

What did the competition brief call for, and what was your approach to it with the design of Dragon’s Eye?
We were given maximum dimensions and the unit had to be portable, contain a king size bed, shower room, compost toilet, wash basin, kitchen sink, boiler and woodburner. The main feature of my design is the ‘eye’ which is the window and allows you to see the whole view. I wanted to make the people staying in the cabin feel they were part of the Welsh countryside, as if they were in the middle of the field but safe inside a cabin. I also wanted the eye to give the impression that a huge dragon was hiding in the mountain.

How did you find the televised part of the competition, and how did it feel to win?
It was a great experience being filmed, I just had to make sure I had enough things planned for when they arrived. Being able to build the design did it for me. I have pushed everything I’ve got and know to the limit. Finding out I won was quite surreal as it had been a long month and I was getting back into a normal routine. I might not have any design qualifications but experience and building knowledge to me is more important; a mix of both is even better.

Explain your passion for timber and creating with it
This is where I struggle – trying to explain in words something I like doing. I guess it’s getting the idea and then creating it, and everything that comes in between.

How can readers learn more and get creating timber structures themselves?
Visit our shop or come on one of the courses at The Centre for Alternative Technology (www.cat.org.uk / courses@cat.org.uk). The Tiny House course, recently featured in the Guardian, is hugely popular.