Ben Carden outlines the two ways you can operate a glampsite without planning permission.

With now being the time to capitalise on demand for staycations, there is much interest in setting up glampsites. There are two options available to you should you not wish to go down the planning permission route, which can be both time consuming, costly and disappointing!

Site licences and planning permission are normally required to start a campsite/glampsite or caravan site, however if your ambitions are on the smaller scale, or if you want to try the industry before you commit to a full blown operation, you can start up using permitted development tented camping/glamping or gain an exemption certificate from an exempted organisation.

But first, a definition. Both permitted development and exemption organisations refer to ‘caravans’. Not just shiny white tourers, the term is legally defined as:

“… Any structure designed or adapted for human habitation which is capable of being moved from one place to another (whether being towed, or by being transported on a motor vehicle or trailer)…composed of not more than two sections separately constructed and designed to be assembled on a site by means of bolts, clamps and other devices; and is, when assembled, physically capable of being moved by road from one place to another…”

Under this definition, movable glamping pods are included with the following dimensions: 20m long, 6.8m wide and 3.05m high (measured internally from the floor).

Most glamping units are typically designed to qualify with this definition of caravans. Shepherd huts, pods, containers and twin unit mobile homes all are classed as caravans. I have had one local planning authority (LPA) agree that a tree house that moves up and down and can be easily removed off site could arguably be classed as a caravan.

The 28 (currently extended to 56) day tented camping rule is the right to use any land for tented camping/glamping. You can also install ‘temporary’ infrastructure so long as this doesn’t require any ‘building operation’. You might find however that some minor development may be excused under the ‘de minimis’ principle but check with your LPA.

The days can be used throughout a 12 month period – not necessarily consecutively – but note that technically all infrastructure should be removed from the site during the days you are not operational, returning the land back to its previous condition.

Permanent bases to glamping accommodation will qualify as needing planning permission. However, one farmer used RSJs and decking to form a platform to which she attached a safari tent. She was lucky that she rented a yard for crane storage and could easily demonstrate it being moved on and off site. The question is, is it a tent or is it a caravan? It was assembled off site and moved in one piece…

Many woods are amenity woodland and should be enjoyed and maintained. If you want to invest in some woodland for glamping, stay away from SSSIs and land with restrictive covenants that remove PD rights – this is standard practice for some of the big woodland sellers.

Exemption certificates
To operate a tented site for longer than tented camping rights allow for under PD, or to open a site with ‘caravans’ (glamping pods, huts etc.) you will need a site licence. For caravans, you will need planning permission before a licence can be issued. Licences are granted by your LPA and you will need to fulfil their requirements regarding health and safety and siting – expect regular inspections.

If you want a small site then you can apply to become a Certified Location (CL) or Certified Site (CS). CLs and CSs are allowed to have up to 10 tent pitches and five caravans or glamping pod pitches, and are exempt from planning permission and site licensing.

CLs and CSs are permitted by certain exempt organisations for camping and caravanning. They are bound by the organisation’s terms and conditions, opposed to the Local Planning Authority licensing and permissions. It’s important to understand the word ‘temporary’. Any fixed structure will require planning permission. Hard standing would also typically be considered permanent.

Exempted organisation started in the 1960s. Woodland Champions is one of the newest and was created because, traditionally, the larger clubs refused to accept glamping fitted in with caravanning. At Woodland Champions, we look for landowners who want to provide a unique glamping experience, not static caravans or touring caravans pitches. After all, there is a large market for glamping and, with the ever increasing choice of accommodation being made available, there is huge freedom of choice.

Sites can advertise their accommodation wherever they like and, on booking, a customer is asked to sign up to the terms and conditions of the club. There is no extra fee and many times glampers won’t know they are booking into a Woodlands Champions Club site.

Other glamping friendly exempt organisations include the Freedom Camping Club and the Greener Camping Club.

Other permitted development
Permitted development is a huge subject that goes way beyond the tented camping rule. There is a lot of scope, depending on whether your land is amenity or agricultural. It is worth getting professional advice and having an open discussion with your LPA.

LPAs and planning consultants
I have now worked with a vast number of LPAs and can report that there is a huge difference in performance and what they agree is ‘permitted’. Some will complete my consultation process within two weeks, others have taken months.

Some say hard standing is fine and permitted whereas other will argue that it constitutes development. A general rule is that up to 500m2 of hard standing does not require planning permission so long as it is connected to agriculture. This is largely to create safe turning circles and access in and out of agricultural areas, preventing mud from obstructing roads while getting farm machinery and livestock safely in and out.

Unfortunately, planning consultants also seem to have a trend of not being open with what does not require planning. Maybe in fear of losing work or the fact that they have the attitude that everything requires planning. If you are going down the planning route, be careful to check their success rate – look for failed as well as passed applications.

I was once served two enforcement notices, one change of use and one operational development. Three local planning consultants told me that they were correctly issued and I must comply as I didn’t have a chance in hell. Knowing a little bit, I decided to challenge the LPA and spoke to a national planning consultant, Mathew Green. He assured me that the council and the three independent local planning expert were all wrong; that it could be one or the other, but not both. At a public enquiry level hearing the planning inspector sided with me and awarded costs for the LPA’s actions and time wasted.

While presenting a friendly face to the LPA could be a good thing, it demonstrates the control some LPAs have over local planning professionals – they are desperate to keep LPAs happy.

Local councillors
My experience with LPAs has taught me that allowing permitted development is normally a tick box exercise and that they rarely let their personal judgment influence their decisions. But watch out for that local counsellor – the one who is retired and believes they own the village, the one with an army of suited people to inflict harassment at his command. They will most certainly interfere with any local planning especially if they have not been given prior notice or had their consent prior. They will hound the planners every day and make their job hard work. In my time I’ve witnessed two counsellors sacked for direct involvement with planning issues. Overstepping the mark and acting ultra vires (outside their authority).

I can tell instantly when speaking to a planner if they are having “political influence”. If it’s not a planner trying to pull your pants down, you can count on a local counsellor to assist with distraction techniques. Having a counsellor in support can ensure a fair route through the planning nightmare! 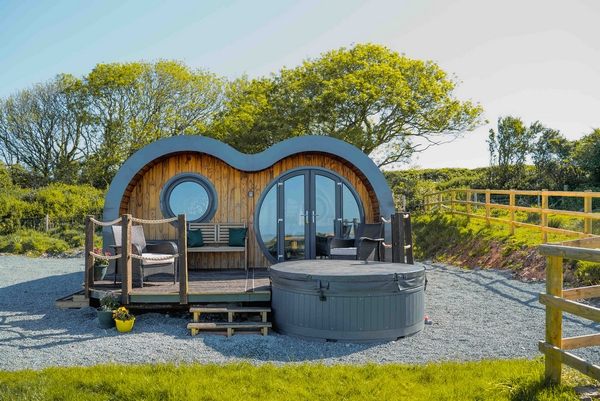 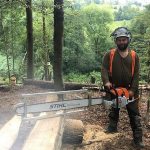 Ben Carden is the club secretary for Woodland Champions Club, an exempted organisation that can help certify locations for camping and glamping.

Ben helped create the club after becoming frustrated that traditional exempted organisations would not allow sites to offer glamping in pods, arguing that it would not appeal to the average member.

Woodland Champions Club is a Natural England exempted organisation and has the main objective to promote outdoor recreation and work with sites willing to plant trees to increase biodiversity and amenity.

To date, Woodland Champions has planted over 100,000 trees, maintains over 500 acres of woodland, and provides support and weekend breaks for male victims of abuse. It now has 50 sites across England and Wales and is looking to expand with sites in Scotland.

Ben is currently studying a law degree having finished a counselling qualification and setting up a male abuse charity. He works part time for multiple charities and loves helping people achieve their dreams. www.woodlandchampions.co.uk