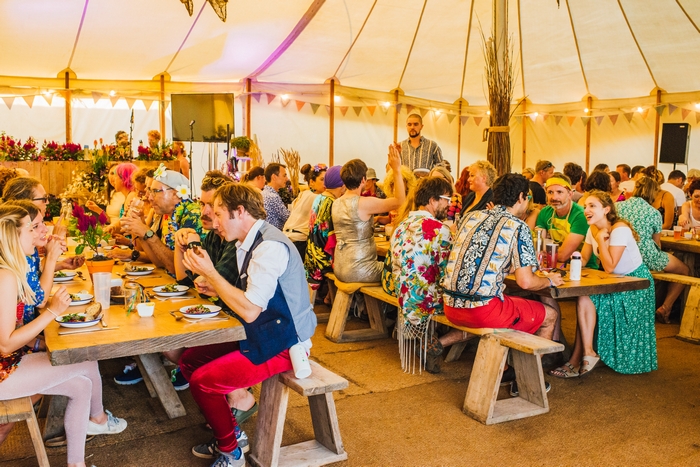 The new year is a time of resolutions. For many it offers a clean slate, a date on which to pin often deferred goals of self-development or altruism. Veganuary, a movement dreamt up in a Yorkshire pub in 2014, has gained huge momentum over the years. Designed to open up the conversation around the positive impact of plant-based diets on the planet and for animal welfare, Veganuary invites people to try out veganism for a month.

Half a decade ago I tried it myself, and after two pretty shaky attempts over successive Januarys I felt ready to go plant-based. This decision is one I try not to be evangelical about. There’s no catchall solution to the global problems that our individual diets have influence over. I try to keep it mutable and take in new arguments for and against as they emerge.

This same openness around the food question informs a culture of continued evaluation and research around what we are serving at Shambala. Food is an important avenue through which the festival plays out its “adventures in utopia” – as its tagline goes. In 2016, we went meat and fish free, to spark a conversation about how our diet shapes the world around us.

Four years on, with an estimated impact of 100 tonnes of GHG emissions saved each year and glowing audience feedback, meat is going to remain off the menu. However, we will continue to review this and explore alternatives. We do this behind the scenes, with our sustainability coordinator undertaking research and evaluations on our impact as a festival. These explorations and debates are also staged creatively over the festival with provocative programming such as panels on invasive squirrel meat, crayfish and future insect farming.

New information is constantly emerging as scientists from all disciplines research the links between agriculture, our food systems and the climate. The IPCC report published last year stated: “Agriculture and the food system are key to global climate change responses. Combining supply-side actions such as efficient production, transport, and processing with demand-side interventions such as modification of food choices, and reduction of food and waste, reduces GHG emissions and enhances food system resilience.” 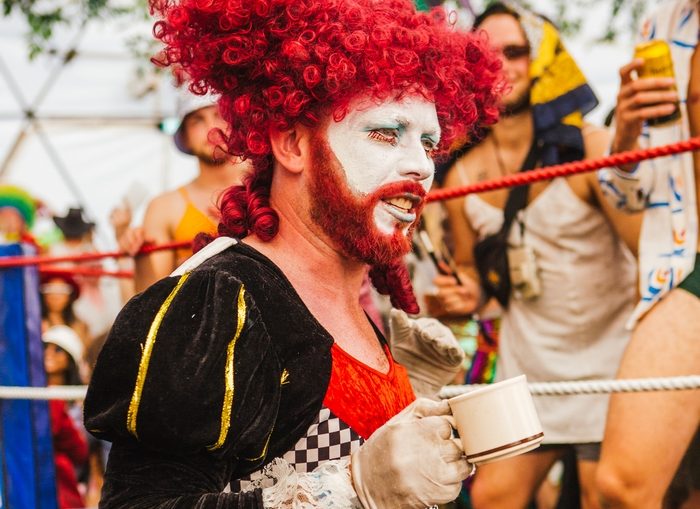 The evidence laid out in parts of the IPCC report reiterated the findings of a study we had undertaken as an organisation on the impact of milk. Overwhelmingly, when considering supply-side aspects such as transport and water-usage, taking cow’s milk off the hot drinks menu was a no brainer. Here was an opportunity, in the microcosm of a festival, to measure the impact of changing our suppliers and festivalgoers’ diets over a weekend. 2019 saw Shambala take another step towards the reduction of our intake of animal-products; something the IPCC report claims is needed to put the brakes on the escalating climate crisis.

After we found that cow’s milk was by far the worst for its overall environmental impacts, we starting thinking about what to do about this information. Going full vegan in a year’s turnover was unrealistic, and undesirable. The jury is still out about a vegan diet, with growers and permaculture experts favouring integrated biodynamic approaches to farming that, based on an ecological understanding, does not totally eliminate good grazing animals on smaller scales. Cattle animals, if managed well, are keystone creatures in enabling grass carbon sequestration.

Certain aspects of a totally vegan diet within a globalised food system have bad socio-cultural and environmental impacts, so prescribing it as a catchall solution is over simplified and can be alienating to a lot of people. How then do we gesture towards the science to our audience without being prescriptive? We turned our eyes to that most sacred of brews, the cup of tea.

Interfering with a person’s cuppa and their morning coffee was not done lightly. We knew that where we were limiting choice by opting out of dairy milk, we needed to present an array of more eco alternatives to choose from that also catered for those with allergies. Trawling through the Ethical Consumer ratings and looking into supply-chain, travel miles and brand ethics, we complied a list of the best m*lk alternatives. Favouring UK grown crops where we could, we went with Minor Figures as our wholesale oat m*lk provider. Getting in a wholesale provider with tanks was also important to mitigate the energy that goes into recycling the tetra-pak that many m*lk alternatives come in. Our soy and coconut m*lk options were organic and European grown.

When we launched our Gone Off Milk campaign we presented the science in a pun-laden, accessible way. This way our audience could see, with transparency, the reasons for the initiative. We published a condensed version that was structured as a FAQ, providing answers to any questions our audience might have. This also demonstrated that the decision was considered and evidence based.

The results of making the switch were overwhelmingly positive. The production of an average pint of dairy milk requires about 1,020 litres of water, whereas oat m*lk requires only 150. By swapping out cow’s milk on site we saved 4,927,680 litres. That’s nearly enough to fill two Olympic size swimming pools! In terms of carbon impact (CO2e emissions) Gone Off Milk helped us reduce a total of 15,123kg CO2e (that’s 15 tonnes). These figures just go to show what a huge impact our individual purchasing habits make. 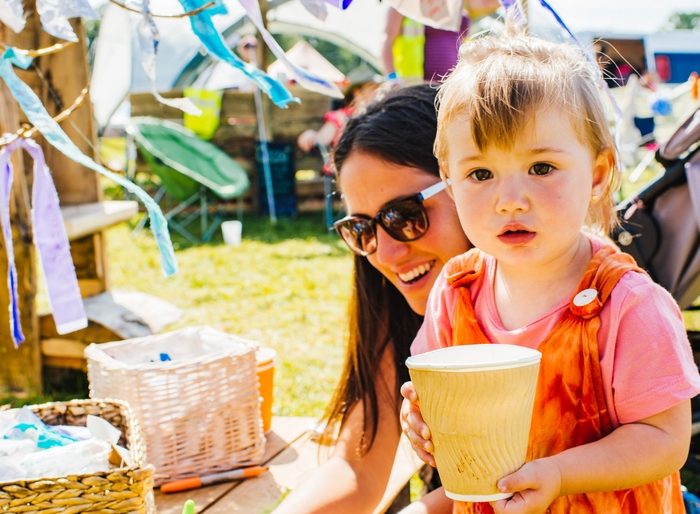 Checking in with our audience post event, we found that half our audience “didn’t notice the difference,” showing just how easy it is to make the switch. 24 per cent of our audience, and 26 per cent of our crew, said they intended to reduce their diary intake after seeing how it can play out over a weekend. One in five cow milk drinkers reported to being total converts to plant-based milk alternatives after Shambala 2019.

The success of this campaign was really heartening, especially considering how it was playing with people’s brew. What transpired was that people can be open to changing things precious and particular to them. Many of our audience were very sceptical when we launched the campaign; some outraged we were tampering with their tea. However, by presenting the science, and by being able to monitor and report on the initiative’s results, our audience was able to see the impacts directly.

What was staged over the weekend, similar to Veganuary, is a glimpse at alternative ways of consuming. It opens up the conversation to event organisers and audiences alike. Explorations in dietary changes at events seemed like a niche exercise only a few years ago but the impact in trialling out small changes can be huge, and audiences might be more willing to go with it than you might think.

As we usher in a new year, we should all resolve to experiment with creative solutions as an industry. With Festival Vision: 2025 launched at the UK Festival Awards last month, it’s time for us to band together, share solutions and strive for a more sustainable industry.

Kate Burgess works as marketing assistant for Kambe Events, covering its events Shambala Festival and Starry Skies Camp. She joined the team in 2018 and runs Shambala’s Adventures In Utopia blog. Headed for a part-time Masters degree in cultural theory, Kate, like Kambe, is passionate about where culture, creativity and community can intersect to bring about more ecological, sustainable futures. www.kambe-events.co.uk