Louis Thompson discusses alternative lodging in the age of pandemics.

Firstly, I would like to start with a disclaimer – I did not receive the gift of prophecy, I am an amateur clairvoyant peering into the future at the request of Open Air Business magazine. The following predictions are entirely sourced through my rather grubby crystal ball and I cannot vouch for the fidelity of the images projected to me via the ether.

The global travel sector has been on a constant growth trajectory for over 70 years, and the trend would, under normal circumstances, continue unabated to reach around 1.8 billion international travellers by 2030. However the party could be coming to an end and we may be witnessing the growth trajectory slowing over the coming decade. The spread of the Coronavirus this month has illustrated the fragility of the global travel industry – the sudden interruption of flights to and from one of the world’s leading emitter markets illustrates the potentially devastating effects a pandemic, or worse still a series of pandemics, could have on tourism.

Now, consider that only seven per cent of Chinese people have a passport. A lot of people have bet a lot of money in a lot of sectors on the continued expansion of the Chinese international outbound tourism market across the entire planet. To give an idea of the scale of the opportunity one statistic speaks volumes – the Chinese population alone took five billion domestic trips in 2017 alone.

The fallout from the virus may topple giants across multiple related industries – notably airlines, cruise ships, travel agents and hotel groups. The financial consequences could be disastrous, not only for the travel industry but for the world economy as a whole. In an increasingly interconnected, digital economy a sneeze in Wuhan may create a tidal wave of turmoil that sweeps across the entire planet.

Without wishing to be a harbinger of doom, we should bear in mind that the Spanish Flu in 1918 killed over 50 million people when the world population was only 1.8 billion (affecting an astonishing three to six per cent of the world population at that time) significantly more deaths than the combined combat casualties in both World Wars combined.

In 1918 there was virtually no international air travel – fast forward 100 years and the landscape has changed quite significantly; pictured is a real time image from an interactive global map showing all the planes in the air, across the world, at a given moment in 2018.

In many ways, each of the lines that appears can be considered a potential vector of contamination and the map illustrates the significant challenges required to contain the disease. Though, it may seem slightly inappropriate or even crass, the logical consequences of the outbreak may have significant benefits for the glamping sector at the expense of some other trending travel sectors. It is very probable that an age of contagion would cause some significant changes in public behaviour:

The madness of crowds

The number of deaths from the virus is, to date, pretty insignificant on a global scale – 800 people as of 9 February, which is a small percentage of the 37,000 known infections. Despite the relatively small numbers involved, the global panic is undeniable – the virus has in fact gone viral; the pandemic has caused pandemonium.

The media, in all its wisdom, has done everything possible to fuel a growing sense of panic and paranoia (which I am not guilty of in the least), morbidly portraying the spread of the dreaded ‘lurgi’, as it creeps across the world country by contaminated country – the poignant combination of drama and fear always makes great content.

This collective madness associated with the illness may be the most important lesson of all for the hospitality industry – whether or not a vaccine is discovered and distributed effectively over the coming months, as a society we ought to ask ourselves some tough questions regarding media responsibility: at what digit will the mainstream news outlets review their decision to publish daily reminders of the numbers of infections and fatalities (a thousand, a million, two)? When should the major players in Silicon Valley start controlling the spread of misleading content that could aggravate a public health emergency? Is that an infringement of freedom of speech? Would it be in their interest to do so?

The Common influenza (flu) kills approximately 650,000 people a year but who’s counting? The impact of the resulting hysteria is difficult to gauge, but the consequences on the collective psyche, personal stress levels and our sense of community should not be underestimated – consciously or unconsciously the traumatic imagery will take its toll by further atomising an already fragmented society in which individuals increasingly fear contact with others. The impact on our children’s lifestyles may be dramatic (supermarkets, gym memberships and restaurants could all suffer). Indeed, if these incidents recur, they may have a very different approach to traditional social interactions than we do today – a collection of isolated, lonely, masked individuals working from home and buying all commodities online (a reality which may prove extremely profitable for a few well-known large companies), but it is a far cry from the more sustainable, egalitarian society that most of our young people aspire to.

Over the last decade, over-tourism in key destinations has become a serious issue and caused high profile conflicts between visitors and local inhabitants in numerous destinations (see my musings from October 2019). That could be about to change – ask yourself whether you would fancy queuing up for six hours with a very large number of complete strangers from across the world to visit the Eiffel tower, the Vatican or the Tower of London? Or how about taking a stroll through the throngs in Barcelona or Venice to see the sites? Do you even want to be cooped up on an international flight with multiple stopovers in crowded airports? What about a lovely long cruise?

I think not. On 7 February 2020, Royal Caribbean, one of the largest cruise ship companies in the world, indiscriminately banned all Chinese passport holding staff and clients from boarding their ships – whether they were ill or not, regardless of whether they had even been to China recently. That decision may seem reactionary but it may well be indicative of things to come. For the cruise industry, contagion could be as daunting as the iceberg looming up in front of the Titanic – illness could ravage the typical ageing, conservative clientele. Systematic racial discrimination by private companies could develop into a legal minefield with inevitable accusations of human rights infringements and high profile court cases.

Now, ask yourself whether you would want to go and stay in a 400 room luxury hotel, managed by one of those big international hotel chains? The international buffet suddenly doesn’t look quite so appetising after the arrival of that tour bus, the swimming pool looks a little opaque and that air conditioner filter looks a bit fuzzy. Could similar radical discriminatory measures be implemented in the hospitality industry as a protectionist measure?

The sharing economy might be hit even harder than any other tourism sector – mutual trust and a sense of global community are the basis of its success. The very idea of staying in someone else’s home or apartment, or riding in a stranger’s car, relies on a series of mutual assumptions, assumptions that could prove to be very fragile under scrutiny in the current climate (a point made by many of the original venture capital companies that rejected these companies when they were start-ups).

The Airbnb hosts in Wuhan are, not surprisingly, offering some serious discounts at the moment; but it is in many ways surprising that Airbnb is operational at all under the circumstances. The lack of regulation in the sector has long been criticised by traditional hoteliers competing in the same space who must navigate a complex regulatory environment, but it is now a matter of urgency to address some of the concerns that have remained conveniently un-addressed by the authorities.

In response to the crisis, an ‘extenuating circumstances’ policy has been added to the Airbnb website to warn hosts and guests to follow WHO guidelines and health advisories, but if you and others catch a fatal disease after staying at one of their listings, is the final liability with the company or its community?

The truth is that the Coronavirus (or a similar outbreak) may radically change tourist behaviour long term for generations to come. Our governments and health service infrastructures are clearly ill-prepared and under-resourced to combat a global epidemic in many destinations across the world, and some business models and companies are inherently vulnerable to public health risks and natural disasters of this type. 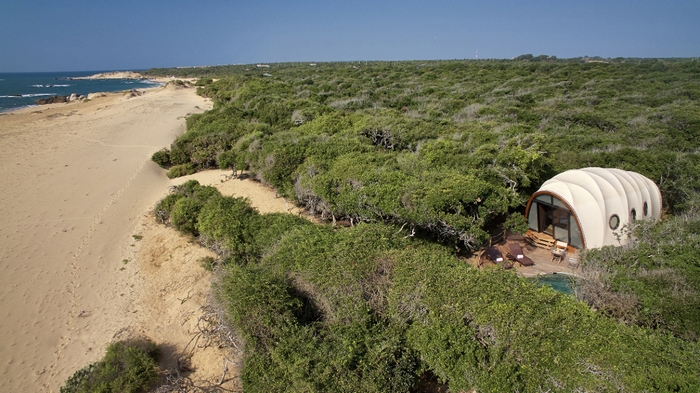 At Nomadic Resorts, we believe that the unfortunate events may be a catalyst for positive changes in the sector: traditional, unsustainable, exploitative mass tourism platforms will probably be hit hardest if the catastrophe persists, simply due to the sheer volumes of travellers involved and the scale of their operations. In parallel, the proportion of tourists willing to risk using independent, unregulated services from the sharing economy may also decrease significantly which may leave a bit of a void. It is not unfathomable, that exclusive, smaller scale, boutique glamping products offering privacy, fresh air, personal space and bespoke service in a hygienic natural environment may find that the tide has finally turned.