Louise Middleton is both the artistic and entrepreneurial force behind Kudhva, a wild retreat on the Cornish coast which is home to four architecturally acclaimed ‘hideouts’ and the world’s first waterfall powered off-grid pub. 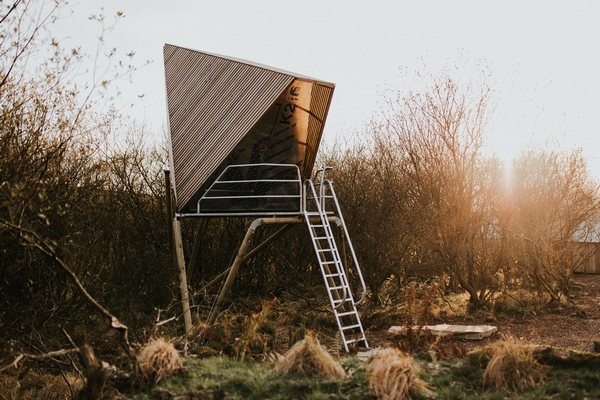 A designer by trade, Louise Middleton qualified with a joint honours degree in ceramics and graphic design at Camberwell College of Arts, before working in fashion, film and then property development.

“I had five different jobs while studying and ran two market stalls at Portobello Market, so I guess I have always been entrepreneurial,” she says. “My mother was an antiques dealer so as a child I had a sense of buying and selling and of beautiful things. After my studies, I created a ceramics collection that I sold to various galleries and designed swimwear that was sold at Selfridges and Net-a-Porter.

“Design has always been very important to me, and looking back I guess I always wanted to be an art director. I didn’t know that was a thing back at college but I have realised my passion through curating Kudhva.”

After marrying, Louise moved to France where she got hands-on in the design and build of four properties. “I have a strong background in construction, from the design process and finance to hard manual labour. That has given me a great basis from which to develop what we have at Kudhva. 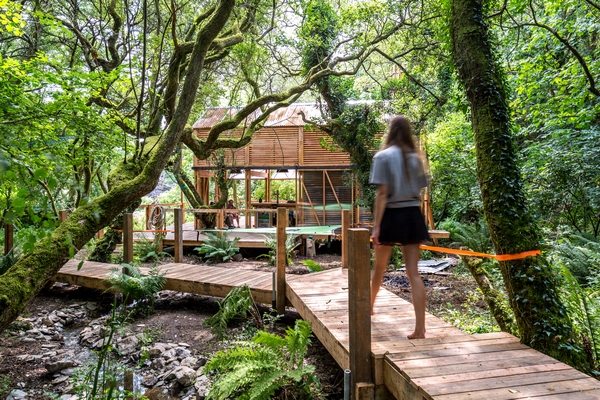 “When we returned to the UK we had a property with 45 acres and I learned a lot about land management, trees and ecology. My husband and I got divorced and it was then that I decided to look out for my own piece of land.”

It took Louise two years and some very determined searching to find her site. “I knew I wanted land by the sea – it seemed like a good investment. I made friends with farmers up and down the coast trying to find an undiscovered piece of land but eventually stumbled across a site in north Cornwall at auction. It had been in the sale the year before as a freehold property but it then disappeared from the market. It is actually an old quarry and is much loved by the locals in Tintagel, and many of them played there as children. There is also a listed engine house on it which is very special to the community so local policies meant there could be no permanent development. I bid for the land over the phone – this time it was sold leasehold, with a 999 year lease from the Duchy of Cornwall.”

Despite its coastal location, what did Louise see in a 43 acre plot of post industrial wilderness? “From a natural resource point of view, the site is very rich. There are two natural water sources and good biodiversity, with woodland and grassland. It also has the beautiful listed engine house structure. That said, the terrain is difficult and access is tricky. Planning permission was always going to be difficult too, but from an ecology point of view it was worth every penny.”

As soon as Louise took ownership in April 2016, the local newspapers were in touch asking about her plans. “I didn’t really want to say anything because I hadn’t made up my mind what I was going to do and didn’t want to be held to anything I had said in print!

“All I knew was that I wanted to be able to generate some income from the land so I could look after my sons and have a good life where I was outside a lot. Whatever I did also had to be original.” 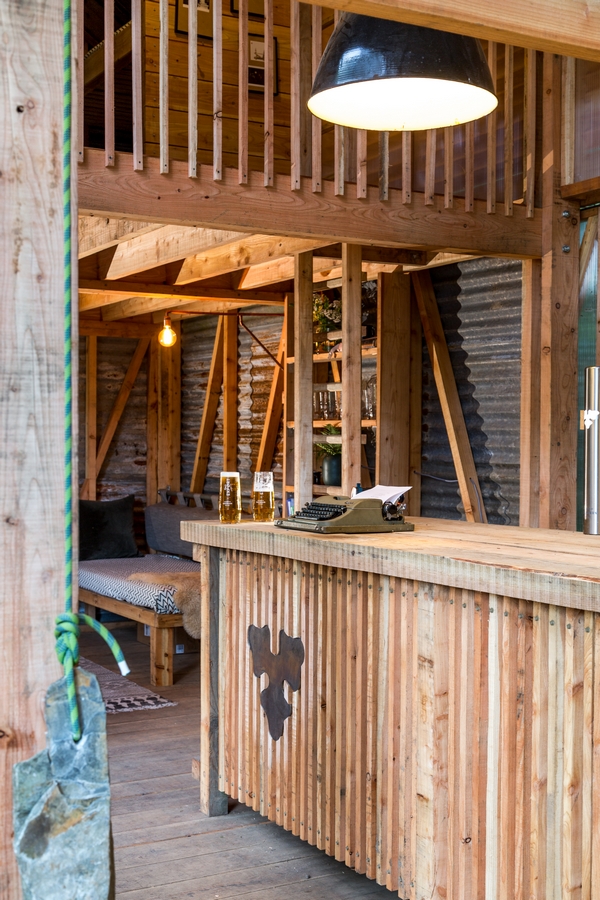 She took a year to get to know the site and work out her plans for it, spending holiday time camping with her three boys. “I took those 12 months to really understand the land – I wanted to be strategic and clever with the design and to do that you need to know where the sunny spots are, where the windy spots are and how things change over the cycle of a year. Only then can you design well.

“My boys and I just hung out there in an old VW camper. We walked, camped, had friends over and got into every corner. I also used Google Earth and downloaded site information from the Plymouth archives. The land was obviously industrial but it would have been a dynamic landscape, where spoil was moved from one place to another throughout the quarrying process and huts would have been built, dismantled and rebuilt as the quarry changed over time.

Louise also did a lot of research into small scale contemporary buildings and teamed up with Ben Huggins of New British Design. “Ben is a cabinet maker who trained under John Makepeace before moving into architecture. I had worked with him before and he is fun and dynamic, and importantly, really gets me!”

Hideouts
Kudhva gets its name from its four eight-legged contemporary treehouses. “Kudhva means ‘hideout’ in Cornish,” says Louise. “I don’t call it a glampsite, I prefer ‘a wilderness with architectural hideouts’ and it was important to me that the units had a very light footprint and were totally off-grid.”

The structures are made from larch, glass and galvanised steel and stand above the treeline at seven metres tall. “We have four hideouts, each sleeping two. They have far-reaching vistas of the north Cornish coast as they are built along a perfect solar arc, meaning you can see both the sunrise and sunset from them. We also have six tensile ‘tree tents’ suspended in the woodland, and a bespoke cabin with six bunk beds.”

The first prototype for the hideouts was made in a cowshed in Tintagel. “I lived in it for a while and tweaked the design. The final units were made in Devon by people I knew who were boat builders and cabinet makers.”

The cabin is a bit special. Commissioned by Carlesberg, it is actually the result of an experiential marketing campaign called ‘Build the Danish Way’ which saw six strangers tasked with putting the flat pack structure together. This was filmed for social media as a four part documentary then the cabin was rented out through Airbnb.

“Carlesberg build a cabin in an unusual space each year as part of their marketing activities,” says Louise. “It is primarily a bar but also sleeps six people. Ben at New British Design surveyed the old engine house then reimagined it in timber at 2/3 scale,” says Louise. “The whole thing is recycled, from the plastic temporary footings to the denim of the sofa cushions and mattresses. It is also a world first in that we use the adjacent waterfall to provide electricity to partially power the beer tap, fridge and lights!”

The tree tents are run on the 28 day rule and the hideouts and cabin are classed as temporary structures meaning they can be moved. “It was a condition of the planning permission but this also fits in with my ambition for the site to be low impact.

“We put together a masterplan, starting by appraising the land and deciding what would work. Then we created ecology reports and looked at access and services. Everything here runs off renewables. We have a bore hole for water, with solar and hydro for electricity. Next were the structures. We are at phase 1.5 now in our phased plan and know how many people the site can take without damaging the landscape or ecology.” 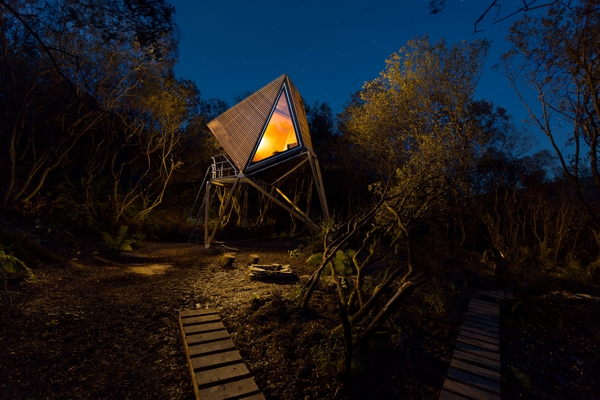 Weddings and events
You can find Kudhva listed on wedding venue directories specialising in the unusual. “We’ve done four weddings to date,” says Louise, “and we want to limit ourselves to no more than four a year. Our couples have to be the right kind of people as the site is quite challenging in some respects – it was purposely designed to be. The real luxury is in the hideouts but the terrain is rough and our ethos is all about reconnection with the wild and each other.”

Hosting the right kind of people is firmly on the agenda at Kudhva, and aside from weddings it opens its doors for daytime music sessions on the first Sunday of each month during the season. “We call it The Sunday Service and get good DJs and musicians, a temporary bar license and really good food. We have up to 200 people and it is very popular with locals. We also work with the local schools who come up for day visits.”

Kudhva offers a range of activities for guests including wild swimming in the old quarry reservoir, surfing at the nearby beach, foraging and climbing. “We have lots of interesting things going on here – at the moment we have artists in residence from four different creative studios including film makers, an author, an architectural interior design and a sustainable fashion label. They have each taken over one of the hideouts mid-week in this pre-season period.

“During our main season we have talks and lectures, yoga and painting – guests can borrow paints from reception.”

Profit and principals
Now entering its second season (Easter to October), Louise reports that she is on track to turn a profit in year three. “Our turnover is strong and we have a good occupancy. We employ local people, with three front of house and one in a management role. I have worked with another local business so that employees can benefit from full time work – part time from each of us. I also encourage team members to bring forward their expertise to weave into operations and expand their own businesses – one now offers surfing activities to guests as that is his speciality. All staff come to strategic meetings and I try and educate and train them too so we all get something out of the relationship.”

Kudhva has been designed from the outset to inspire its guests, offering them an opportunity for true reconnection with the wild surroundings the Atlantic coast offers, and Louise has built more than just a business out of this principal. “Kudhva has been created as a melting pot of ideas – not just in the architecture, the talks and the events, but in what can happen when you bring people together and strip them of technology and distraction.

“It is an evolving and ever changing landscape, a place where the natural environment rules over the man-made, and where our input is simply to enhance and showcase the nature which surrounds us. The dream was to create a space which takes people away from the everyday, celebrates the sustainable, and encourages people to meet, be creative, discuss and challenge.”

In asking about any mantras Louise lives or does business by, she gave me the Kudvha values: Working with nature; Off-grid conversation; Elevated experience; Wild abandon; and Ruthless kindness. With such a powerful agenda, I can see why business at this piece of coastal wilderness is thriving.