A brave and controversial business decision has put the Knepp Estate on the map as a thriving eco-tourism business and arguably the most important conservation project in the UK. We talk to Isabella Tree.

“Charlie inherited Knepp Estate from his grandparents in 1987,” says Isabella. “Farming was very much in his blood. He studied agriculture at Cirencester and when he took over we assumed the failing intensive arable and dairy operation was to do with his grandparents’ lack of investment in infrastructure and modernisation. He made changes, yields improved and we had three of the best dairy herds in the country but our problem was, and always had been, the clay we were on – 320m of it. When you can’t get heavy machinery onto the land over a wet winter, sometimes for as long as six months, you just can’t compete in today’s global marketplace.”

In the year 2000, Charlie made a controversial decision. “He decided to stop farming. It was terribly brave and upset friends and family, as farming is in the family DNA. It was a very sad day when we sold our wonderful dairy herds and made our farm manager, a friend, redundant along with nine others.”

But if Charlie and Isabella were to have had a crystal ball they would have realised the decision couldn’t have been more timely. “We sold our milk quota at a peak, and the dairy herds just ahead of the foot and mouth outbreak,” says Isabella. “And the following winter was the wettest since records began in 1766! 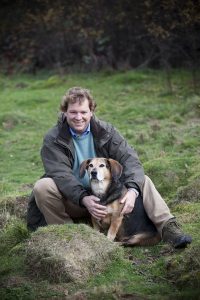 “If you have ever had the misfortune to find yourself in a failing business you’ll understand when I say that you’re always looking at the detail and not the big picture. We breathed such a sigh of relief once we were free of farming – our heads were finally clear to look at the land and imagine other possibilities.”

The couple initially looked at reinstating the parkland immediately surrounding the family home at Knepp Castle which had been ploughed up for the ‘Dig for Victory’ campaign during the Second World War and intensively farmed ever since. “We planted Low Weald wild flowers and grasses on the 370 acres that had previously been the castle’s Repton-style park. We created a management plan and received funding from the Countryside Stewardship Scheme.

“Walking knee-deep through ox-eye daisies and lady’s bedstraw, and kicking up grasshoppers and common blue butterflies, that following summer was an epiphany – this is what we and the land had been missing – insects!” And with the insects came the birds. In true parkland style they then added fallow deer in 2002.

“The addition of fallow to the park had set something alight. We were returning to an older landscape, something that felt more alive. The land was in recovery and it had launched us into the living landscapes of the past, allowing us to cut the Gordian knot of twentieth century agriculture.”

But this was just the beginning. In the same year as the farm machinery sale, Dutch conservationist Frans Vera’s book Grazing Ecology and Forest History was translated into English. “It was sending shockwaves through the conservation world and laid out the potential of turning land entirely over to nature by the introduction of grazing herbivores.” Vera hypothesised that our natural landscape, before human intervention, would have been much more open than previously thought, with herds of roaming herbivores such as aurochsen (the original ox) and tarpan (an ancestor of the horse) being intrinsic to the biodiversity. “Through these animals trampling, puddling, rootling, debarking trees, and the effects of their dung and urine, the landscape would have been a kaleidoscope of mosaics of scrub, grazing lawns, water meadows and forest, with beavers by the millions creating dynamic waterways. 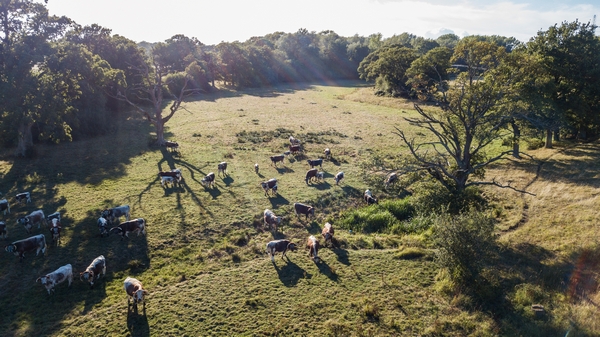 “Charlie was so excited by the potential this approach offered our land that he wrote to DEFRA with a ‘letter of intent to establish a biodiverse wilderness area in the Low Weald of Sussex’ encompassing the entire 3,500 acres.”

By releasing livestock – Exmoor ponies, longhorn cattle, Tamworth pigs, and red and fallow deer – onto the estate, Isabella describes how natural biological processes were kickstarted. “The pigs opened up the thick grassy sword for insects and plants to colonise again and the browsing animals trashed the woodland allowing vegetation complexity and biodiversity to return. Instead of turning the whole lot over to a conventional nature reserve, we just allowed thorny scrub to appear, added animals and sat on our hands to see what happened!”

The whole story is documented in Isabella’s inspirational book, Wilding, but the short version is that the theory worked and the land has rewilded to the extent that it is now home to all five of the UK’s owl species, 13 of the 18 bat species, peregrine falcons, nightingales and turtle doves as well as burgeoning populations of more common species. There are now 62 bee species, 30 wasp and the largest breeding population of purple emperor butterflies in the UK. 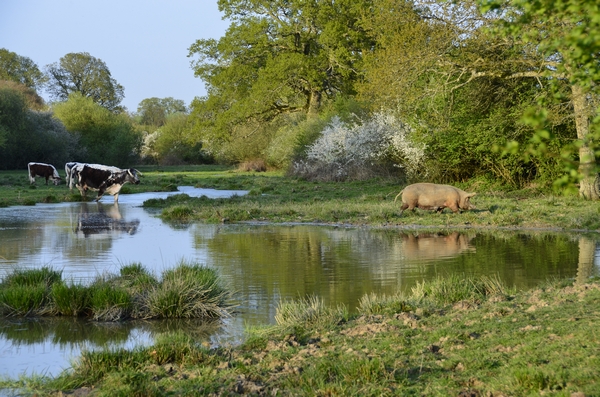 With the cessation of intensive farming at Knepp, Isabella and Charlie needed to create new revenue streams. “It is an important part of the story as we couldn’t do all this through altruism, it had to work financially. We continued farming but in a more extensive way, more akin to ranching,” says Isabella. “Culling the animals is critical to maintain the balance between vegetation succession and animal disturbance. The browsing herbivores keep the scrub in check and create the ‘messy margins’ which are so important to wildlife.”

So, Knepp now has a line in ‘wild range meat’, producing 75 tonnes of pork, venison and beef a year bringing in £120,000. “It is ethical in the sense that our animals have the most natural life, the young being left to suckle for as long as their mothers allow them to. They have excellent immune systems and are free to express their inherent behaviours – did you know pigs could dive? The meat itself has incredible flavour and unique health benefits – it’s low in cholesterol, high in fatty acids (the right kind) and CLA – one of the most powerful cancer-fighting agents in nature. There’s increasing demand for ethical meat as people become more aware of the problems with intensive farming in terms of the environment, animal welfare and the quality of the end product.” 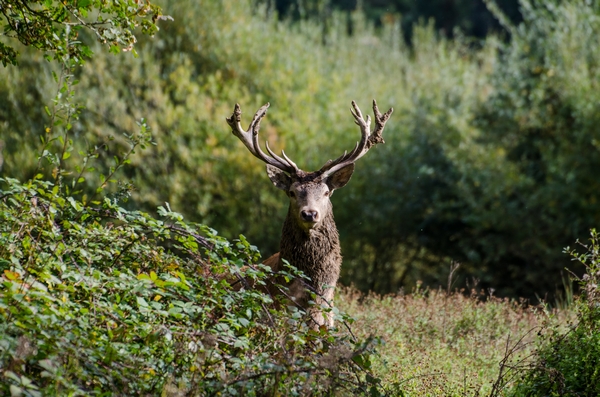 Isabella reports they hope to triple their income from meat in the next few years as they begin to sell direct to the public and start adding value by making charcuterie and old-fashioned health-giving products like lard and beef broth.

In 2014, Knepp launched safari style guided tours of the rewilding project along with glamping and camping. “Once the headline species came back we realised we had something special to share. People were increasingly wanting to come and instead of recommending local B&Bs we thought why not stay here for the total experience?”

Knepp now has two yurts, two bell tents, three shepherd huts and two treehouses. The glamping and safari operation brings in around £300,000 with a 20 per cent margin. “Charlie has spent a lot of time in Africa and Australia and is a big landscape person. We have both travelled extensively and been to lots of tented camps. We based the glampsite on African camps and added the shepherd huts for an English twist.

“There is a central glamping kitchen which gives people the chance to meet and share experiences of what they’ve seen that day. For those that want to keep to themselves they can cook on their own private fire pit.”

The two treehouses were created by Jo Etheridge from New Leaf Tree House Company, who also built six viewing platforms dotted around the project close to footpaths, so visitors can get an overview of the new landscape. “Jo is local to us and uses a system to secure structures to trees without damaging them. It allows the tree to grow and expands with it.” 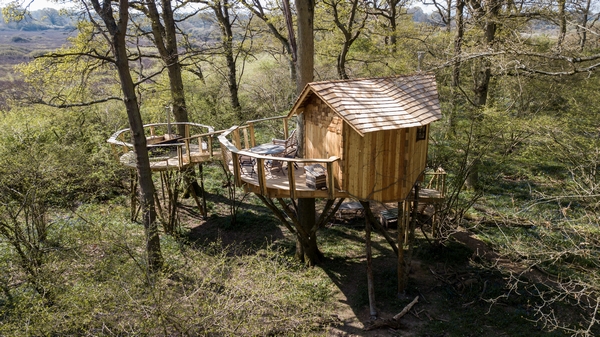 Knepp also plays host to ‘wild weddings’ with receptions held in tents in the Repton park surrounded by free roaming animals. “We try and keep to every alternate week throughout the summer to allow the land to recover in between. The wedding guests seem to love the animals wandering around them.”

Other revenue comes from the conversion of the old agricultural buildings into light industrial use, storage and office space (bringing 200 jobs back into the rural area), as well as a Higher Level Stewardship agri-environment subsidy and the Basic Farm Payment.

The new look estate now employs a large team including a campsite manager, safari manager and part-time cleaners, chefs, guides and maintenance crew. “The operation is growing and growing,” says Isabella. “We are 90 per cent booked for the safaris this year already and are looking to increase the number of guides so we can run some more. As for the glamping we are probably at capacity now. We don’t want to spoil what we have created and are very happy with the income stream we get from it. We have to let nature be our guiding principal and priority.”

Isabella makes the point that they didn’t grow too quickly, using the first year to troubleshoot and learn. “We started very small, with just a few camping and glamping pitches. We deliberately didn’t make a song and dance about it as we were learning on the hoof but now I think we’ve shown the potential for ecotourism for rewilding projects in this country. I believe we’re at the tip of the iceberg; the more urban we become as a society, the more people want to experience nature first-hand and there’s a real desire, now, for truly wild places.”

Frans Vera, who now sits on the Knepp Advisory Board, remains a constant inspiration. “He is a true scientist, in that he’s very open. He’s as fascinated as we are to see what has unfolded here at Knepp. His theories continue to guide the project; far from a traditional nature reserve where the onus is on humans to maintain things, often at great financial cost, he’s given us the confidence to allow nature to take the driving seat. In doing so we’ve gone from a nature-depleted, chemical-soaked landscape to one of the most important areas for wildlife in the UK, all by simply letting go.” 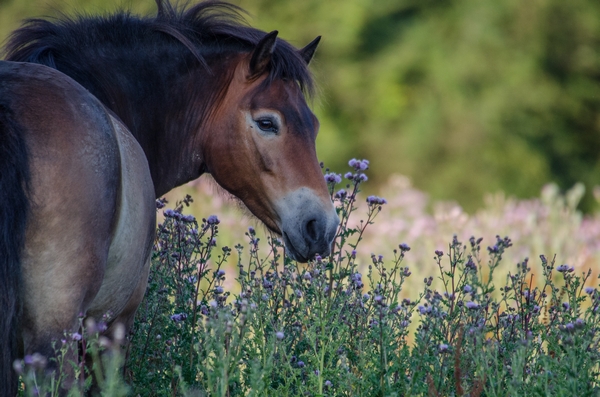 ‘Wilding – the return of nature to a British farm’ is now out in paperback (£9.99) and audiobook read by Isabella.

For more information on Knepp safaris and glamping, visit www.kneppsafaris.co.uk