A magical world of ‘philosophical’ structures in the midst of the Forest of Dean.

Dome Garden, set in the Royal Forest of Dean, Gloucestershire, is a purpose-built glamping site comprising a collection of 11 geodesic domes. These space age, eco-lodges are formed into a camping village, offering a blend of environmental principles with real luxury facilities for a unique outdoor holiday. Inspirator Jonny Clothier tells us more.

Why glamping?
As a TV producer, I witnessed the start of an implosion in the television industry and knew I needed another string to my bow. The Dome Garden started as a little side venture, but has now grown into a site that is regularly selected as one of the five best in the country and occupies all my family’s time.

What research did you do?
Six years ago the phrase glamping had only just been coined so there was next to no-one to offer advice. Everything had to be done following gut instinct and with blind faith. The Dome Garden is a huge project in terms of construction and investment; it was a bit of a punt! The strongest influence probably came from my background in TV – creating something from the imagination and giving it physical form. The Dome Garden is very much like a TV show in that it has been constructed to do a certain thing and as it is added to, the magic is reinforced. Other than that, as a life-long visitor, I’ve probably picked up a few influences from Club Med.

What accommodation do you offer?
There are a mixture of geodesic domes and solid-built concrete shell domes at the Dome Garden as well as two stylish B&B rooms based on the theme of recycling. Unlike yurts and tipis, geodesic domes have a philosophical and historical base in Europe having come from a series of theoretical investigations by a long sequence of European philosophers. They are made of engineered materials that are far better suited to keeping out the elements all year round.

Tell us about your location and site
Nowhere on the planet is there anything like the Dome Garden. Each of the 11 domes is unique with individual features – like the new green dome completely covered in non-living walls – or the ‘fantasy’ domes – semi-subterranean units with coloured clay walls that might have come from ‘Middle-earth’. Many believe the author Tolkien was inspired by the Forest of Dean, where he spent much of his time while writing The Lord of the Rings. 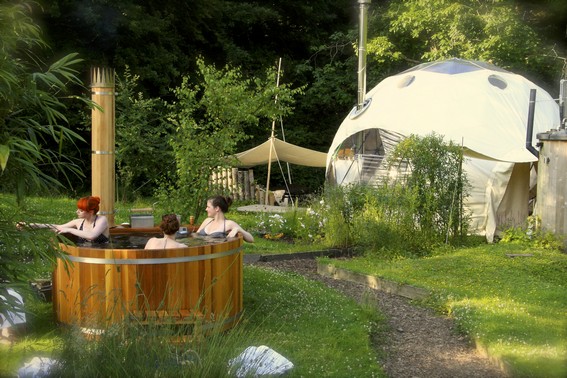 Each of the domes has an en-suite, with water heaters on one side and a fully equipped kitchen shelter on the other. Much of what we do is inspired by the forest, while a unique connection is formed between guests and the location. At the heart of the site is the Forest Lodge, which houses a small restaurant and the B&B rooms. Food has become an increasingly big deal; we provide an imaginative array of meals, all loosely based around a ‘wood-fired food’ theme.

Dome Garden is set in the midst of the Forest of Dean where a multitude of outdoor activities are offered. So, no matter what the weather, there is always something to do. Of particular note is the layout of the site itself, sufficiently spread out to be private, with individual, enclosed gardens with their own decks, but close enough to form a village atmosphere where, over the course of a stay, children and adults may enjoy the company of others.

Where did you source your glamping units?
Originally we tried to buy the units from American suppliers, but they were so slow, so inflexible and so difficult to deal with that we looked to Europe instead. However, that alternative was way too expensive. So we started to build the domes. How difficult could it be? It turned out the answer was very! Four versions down the line we now make the most comprehensively redesigned geodesic domes in the world. They are built specifically with the glamping market in mind and have 52 features that distinguish them from other manufacturers’ products.

How do you get the word out?
Mostly via the internet and various aggregate sites, but also through our own website. We’ve been featured in many national newspapers, which have regularly placed the Dome Garden at the top of their picks for glamping in the country. I’m also about to become a ‘glamping guru’ on a new Channel 5 show hosted by Lisa Holloway, the country’s friendliest B&B landlady.

How did you choose your interiors?
A previous career was as an architect – working on Terminal 4 at Heathrow – so my background in design is very strong. Rather than going for the ‘cosy chic of post-millennial schlock’ we have chosen a more idiosyncratic route. Our latest, non-living wall in the Green Dome is a good example. Covered in artificial plants, the dome has become an inside-out experience that is refreshing and bold at the same time. We have a motto – ‘not like it is at home’ – which guides much of what we do.

What challenges have you faced?
Organisational, practical, financial, emotional, spiritual, philosophical – you name it. Life is exhausting and frustrating and very difficult, but also hugely rewarding and satisfying.

What are your future plans?
The Dome Garden project will always be a work in progress. At the end of every season we come up with a list of improvements and developments for the winter period. There is no shortage! In the long run, a new style dome that we are working on, domes on the roof of the main lodge and a small underground spa. Everything else is secret. 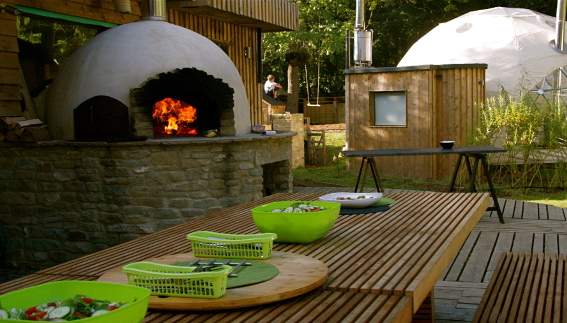 Describe your average day mid-season
Mid-season the Dome Garden is calm and beautiful. We make amazing food in a relaxed atmosphere for discerning customers. It’s a great time to visit because the principle focus, other than the site itself, is the birds and the wildlife in the surrounding forest. When really busy the focus shifts slightly inward to the throng of life that the Dome Garden itself generates.

Do you enjoy the business and why?
Gosh, yes. The constant challenges, the chance to express ideas in physical form and the amazing clients – especially the ones who return every year. Sad but true, the best bit is seeing the kids cry on the way out because they can’t bear to leave. 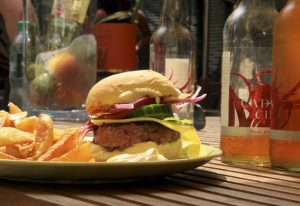 Have you any other outdoor hospitality offerings?
The whole site can be available for weddings or corporate events. The magic of the location and the iconic structures make for a spectacular wedding back drop, and there is the added benefit of onsite accommodation for 50 guests. Our covered terrace can also seat 90 diners and we offer silent discos in the lodge – it keeps things peaceful and they are more fun!

We also have a yurt hire business called Simply Yurts, which provides genuine Mongolian yurts for events. It’s a fantastic business that takes the Dome Garden ethos and plonks it down in people’s gardens for them to enjoy.

Any advice for others?
Do not underestimate how much such a business will take over your life. To be good at this you have to commit both your finances and your resources – practical and personal. It will also cost way more than you think! 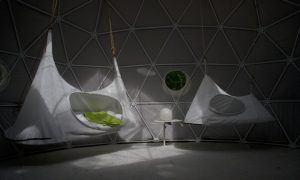