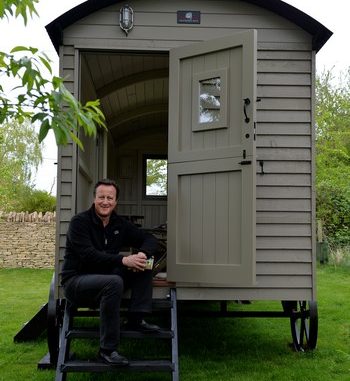 David Cameron has purchased a luxury shepherds hut for his Cotswolds home as a writing retreat and play house for his children. The £25,000 custom made hut from Oxfordshire based Red Sky Shepherds Huts features Bakelite switches, a corner-set wood-burning stove and a pull-out double sofa bed. He found the company through Google.

Business owner Paul Bennett said, “I got the call from Mr Cameron totally out of the blue. He had Googled shepherds huts and I’m pleased to say he found our website and liked the look of us. We’re based near Abingdon – so also local to his Oxfordshire home, and that was important to him. The other thing was the fact that I’d only been able to set Red Sky up a few years ago because of a change in rules on pensions that Mr Cameron made happen while he was PM. It only dawned on me that this was the case when I was going over to meet him – so that gave us lots to talk about!

“Apart from the fact that he had once been our Prime Minister, he was every bit a typical customer and keen to enjoy the process of designing a bespoke, hand-crafted hut which could be used by all the family. Although we were helped by his wife Samantha’s fantastic eye for design and colours – she chose the colour palette and I have to say I’ll be pinching some of her ideas!”