Land artist Andrew creates award winning installations on grass canvasses using high tech equipment while making sure to ‘colour in without going over the lines!’. 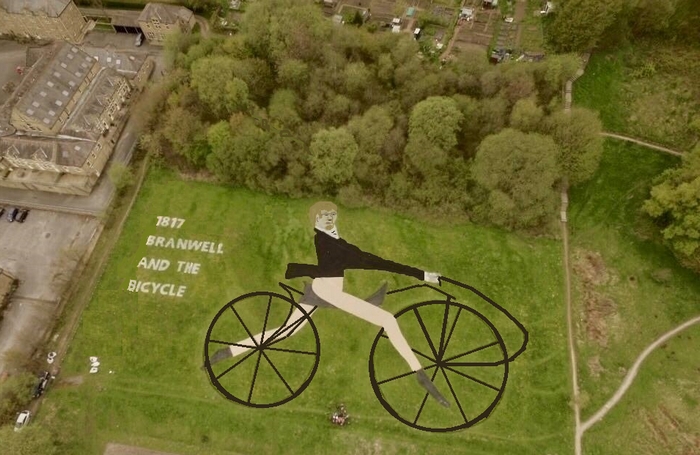 Most of the work that our Fields of Vision land art team does tends to come in the fortnight prior to the Tour de Yorkshire in early May. April showers are not conducive to good land art therefore when the forecast is dry we get started early to make hay while the sun shines.

In the weeks prior, the design of the land art will have been planned and finalised. Sometimes I will have been commissioned to do the design, sometimes it will be another artist. It could be an existing advert or it can be a design that has come as a result of a competition between school children or members of community groups. Whichever way, by the time the installation day dawns and we arrive on site there is no time to make further artistic changes; our job to transfer the image from paper to pasture or pitch.

Our first land art works were for the Fields of Vision ‘route animation’ project for the Tour de France Grand Depart when it came to Yorkshire in 2014. This was a baptism of fire as we installed 12 in a month using varied methods including sowing different grasses, cutting, painting, burning, tarpaulins and even getting cyclists to wear paths into fields to create the image. Today, as per the vast majority of our recent work we will be painting the image on by spraying organic pigment of different colours.

The location and design of the artwork determines which of two different land art methods we use. For the Grand Depart, the artworks were installed on the steep valley sides of the South Pennines so that they could be viewed from ground level at the other side of the valley. These steep and often rough ‘canvasses’ meant that we had to use the old fashioned method of string and tape measures to mark out the image. This was time consuming and very hard work, walking up and down steep slopes all day. As time has gone on and more people (including us) have purchased drones, it’s much easier now to take photos of the finished product from above. As a result most land artwork commissioners now choose a flat field which lends itself to use using our exciting new GPS controlled line marking machine. This uses 12 satellites to guide every move the machine makes. It is accurate to within 1cm and the sprayer simply won’t spray if it is in the wrong positon, giving a perfect image from above.

Today we’ll be installing a land art that I’ve designed called ‘Broad-ford’ which has been commissioned by Bradford Council to go alongside the route of the UCI World Cycling Championships. Often the most difficult part of this job is to manage the liaison between the farmers who own and use the fields and the artists. As a farmer’s son, and having a bit of an artistic eye, I can just about act as the mediator long enough to get the job done. These days we offer a field finding service and find that if you talk to a farmer in a language they understand they are usually enthusiastic to host an artwork. 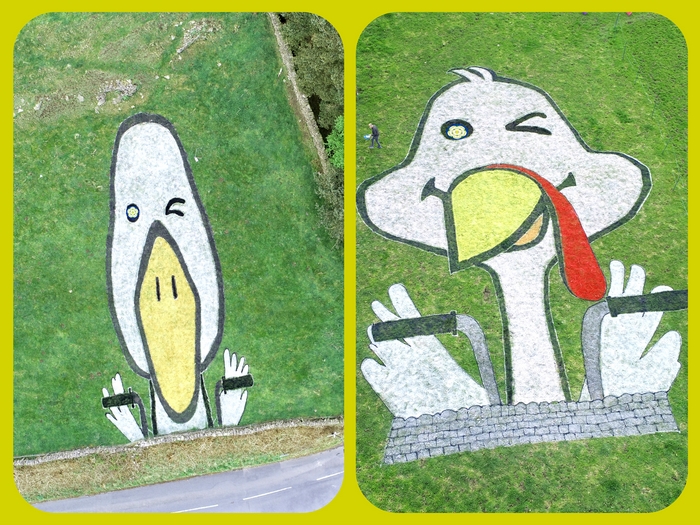 Today’s location is on the very flat front lawn at Bradford Grammar School so the GPS sprayer, with some assistance from some ‘old skool’ tapes and pegs, is selected. The sight of a team in hi viz jackets with measuring tapes and marking out strings usually sparks panic in the location we are working in with locals fearing that we are there to start building on their prized greenfield land. So this makes for the first major distraction of the day – telling people we are land artists. As the day goes on, subsequent questions become ‘What’s this for?’ and then, as the design starts to take shape, ‘What is it?’

One very important thing to get right is to upload the correct image for the site. One wrong move would mean a land art design meant for elsewhere, or a rounders/football pitch or athletics track could appear, which the commissioners might not be too happy with! Once the design is checked and double checked, the image is uploaded onto our tablet which controls the GPS line marker and my colleague David Burlison draws the key lines onto the field. Then it’s a case of joining the dots in faint white paint with the knap sack sprayer before we send up the drone to make sure everything looks bang on, tweaking if necessary.

Colouring In
Next the land art starts to come to life as we do some coloring in. Sometimes we find that just white pigment on green grass works perfectly but today’s design is inspired by diversity and as a result many different colours are involved over the 30x30m grass canvas, which is about average for the size of our land arts.

We spray one colour at a time starting with white and working to the darkest so that less washing out of the sprayer is required. My job is to prepare a suitable amount (often hundreds of litres) of the next colour using strong primary colour dyes with the white pigment. As I do this, David, with the knap sack sprayer on his back, calls up the skills he learned as a child of colouring in without going over the lines. This is the bit that we often invite the artist, commissioner or landowner to get involved with, colouring it in so when the artwork is publicised they can proudly say, “I did a part of that.” 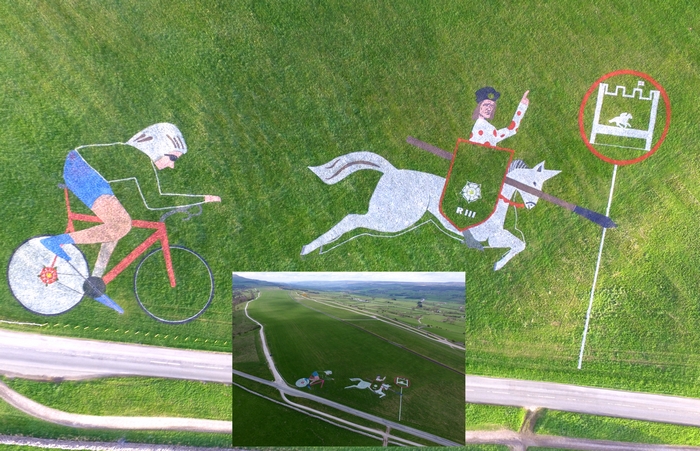 Probably our favorite Fields of Vision moment was at the Tour de Yorkshire 2019 when we were stood alongside the route in the village of Goose Eye where we had done the land art ‘Winking Turkey, Winking Goose’ with the local community. As the peloton came through, the helicopter that was filming the event went over and then suddenly veered off the route, and came back to hover over the village, aiming its camera directly at the land art. There was a cheer from the population of Goose Eye as they knew their little known village was being seen by 24 million people around the world.

As we finish off with the colouring in there is usually a gathering of people stood around watching still scratching their heads as to what it is because when you are stood on the ground the image doesn’t make sense to the eye. So then it is time for the big reveal moment as everyone stands behind the tablet and hopefully says wow as the drone beams down the pictures from above.

Then it’s time to pack up and send the images out so they can go on social media and be entered into the competitions. We’ve been honoured to have won the Tour de Yorkshire Land Art Award in 2017 with ‘Branwell Bronte and the Bicycle’ in Haworth and with ‘Winking Turkey, Winking Goose’ in 2019. This spring we’ll be defending our title but are also looking to branch out into doing more for outdoor events, both in terms of pre-event promotion and something special to admire when you are there. We also have plans to do wedding proposals from the air and even land art experience days.

After about six weeks our land art will be cut away, grazed away or naturally fade with the weather. But by then they have done their job and we’ll be looking forwards to the next Fields of Vision. 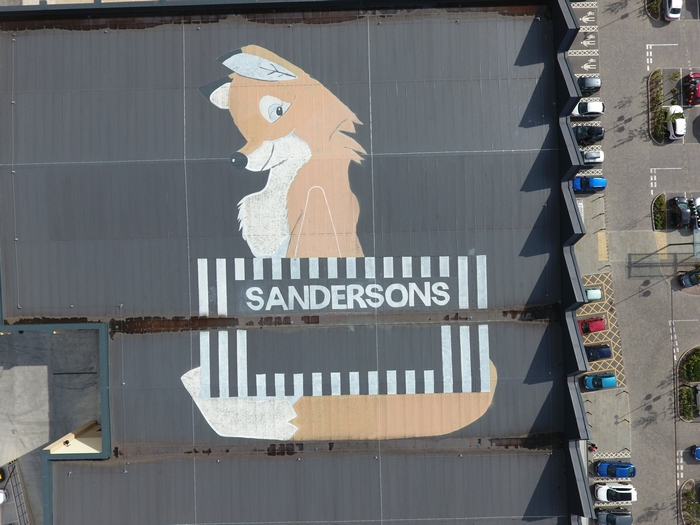 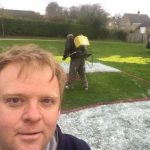 Andrew Wood
Andrew’s day job is as community fundraising manager for Sue Ryder Manorlands Hospice. A farmer’s son, he made his first land art from different colored grasses while working at the Sports Turf Research Institute at Bingley. Former chairman of Yorkshire Federation of Young Farmers Club (YFC), Andrew started Fields of Vision with a fellow member of Worth Valley YFC and today runs the venture with David Burlison of Lawn Order. Andrew lives in Oakworth near Keighley, West Yorkshire, where he also has an Airbnb let.

Fields of Vision Land Art
Fields of Vision was originally the name of a Young Farmers land art project for the Tour de France Grand Depart in 2014. After the event there was a demand for further works and so the venture was established with the Fields of Vision name. You can see more artworks at bit.ly/3auqjH9. If you are considering land art for any occasion, get in touch at info@fieldsofvision.org.uk