We meet the man behind Mount Druid, the quirky, alternative Irish venue and glampsite. 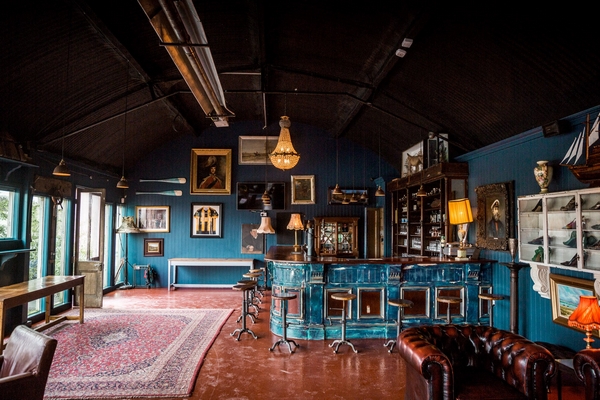 With a background in property refurbishment and lettings, Adrian Murphy was in a good position to make the most of a farm he purchased in 2005. He had moved to the village of Castletown Geoghegan in Co. Westmeath, Ireland, four years previously and saved the site from major development by a volume house builder.

The farm is set on 100 acres of parkland and features a Church of Ireland rectory dating back to 1825. It is now also home to Mount Druid, a quirky events venue and glamping destination. The name has come from the original townland the site occupies, which Adrian found on an 1858 map.

“When my family and I moved in we always had the intention of doing something commercial. The site is still home to an organic sheep farm but a lot of the early decisions we made with the rest of the land were done with a commercial thinking cap on. I was always thinking, would the general public like this?”

In 2006, Adrian built a lake. “We also planted an awful lot of broadleaf trees – about 200,000. This cost a lot of money and people said we were mad as we’d never see the results, but with that attitude no one would even plant a tree! They are now 15/16 years old and 30 feet tall; they really do add to the place.”

And why plant all those trees? “I guess primarily out of the love of trees. I love trees and people in general love trees. We have old chestnut trees on the land and the local school kids come up in the autumn to collect conkers. The fact trees are good for the environment is a bonus; sustainability is important to us but it isn’t something we brag about.” 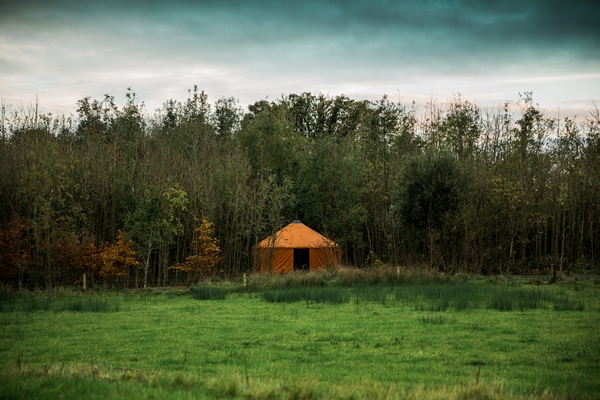 In 2011, the family had to start making the land work for them. “We got into trouble with the banks and needed to bring in some money. Our first enterprise was glamping. I was watching Country House Rescue on Channel 4 and saw that despite them putting a lot of time and effort into transforming the lovely Georgian house into a B&B, everyone wanted to stay in the geodome in the garden. Most of us get to stay in nice houses from time to time but not something quirky and outdoors.

“We put in planning and were fortunate enough to not have one objection. There are three pubs in the village and they all benefit from the people we bring to the area. Rural Ireland is pretty much on its knees so the business coming through has really helped and Castletown Geoghegan has managed to keep its village post office and shop, which are vital in this community.” 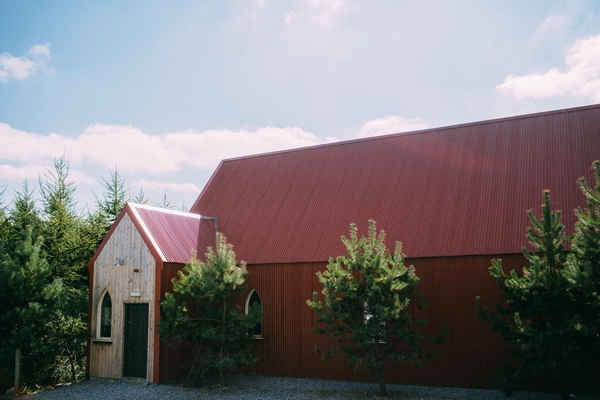 Adrian researched domes but couldn’t find any on the market at that time so turned his attention to other structures. “I had stayed in a Mongolian yurt when I was 19 and loved it so I ordered 10. It took us a week to put the first one up – no one here could read the instructions that were in Mandarin! The last one we had up in a morning.”

Adrian started marketing stays in the yurts through Facebook and then a one page website. “I had put my mobile as the contact number and was receiving calls at all hours. By the third weekend of opening we were fully booked and it continued like that.”

And then National Geographic got in touch… “When the call came in I thought it was a mate winding me up. I Googled the journalist who said she wanted to include us in their Travel Insights. She seemed legit and came to the site, asking me a thousand questions.

“I could have started out with a grand marketing strategy but everything came together organically and we just flew.” 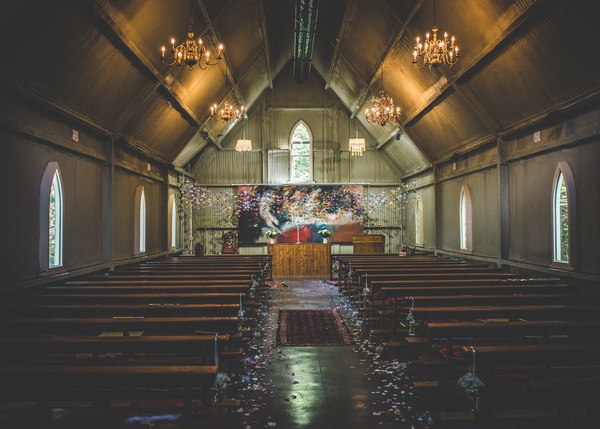 From the beginning Adrian says he had a ‘festival head’ on. “I was thinking all the time about festival-type off-grid infrastructure, but this isn’t always practical. For instance, we started off with eco, composting loos but quickly tired of them. Luckily for us we had the mains sewer going through the land so we installed flushing toilets. We have kept the festival vibe with festoon lighting, a converted double decker bus and other quirky touches – nothing run of the mill. We also have shepherd huts and five small stone Irish cottages.”

In 2011, Adrian took his festival thinking to its logical extreme and launched Green Village Fest to help promote the glamping.

“We got 3,000 people but we were expecting 30,000! We learnt a hard lesson. We had too much of everything and lost a fortune. There were some excellent elements though, including a speakers’ tent and we got famous economist David M Williams to talk. It was only three years after the big crash in 2008 so it took big balls to do what we did and I am proud that we gave it a go. I would do it again, but smaller.” 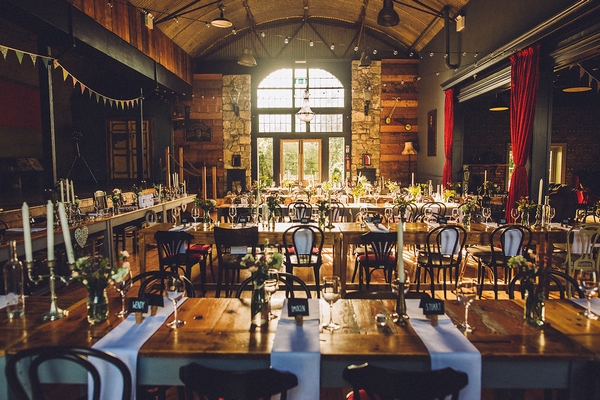 Mount Druid made the move to weddings in 2012. “We looked at the price of hiring a marquee and realised how cost prohibitive it can be for couples so figured we should create a purpose built place.”

Mount Druid now boasts an unconsecrated tin chapel that seats 190, a converted barn and a boathouse. The chapel was designed by Adrian and put together by local builders. The first bride was Annaleigh McCaffrey, who happened to be the head of marketing for Primark. “I told her that if she booked a wedding I’d build her a church! It’s nestled among the pine trees on our site and is perfect for a simple blessing or a full ceremony.”

The bride then spread the word. “She told all her media buddies about us and in that first year we held seven weddings. In 2013 we had 27 and in 2014 we had 40. Pre-Covid, we were up to 75 weddings, each a wee mini festival in itself!”

For post wedding drinks and canapés, guests use the fully heated Boathouse, which was completed in 2012. “We have a Jamie OIiver wood burning pizza oven housed in its own glazed kitchen so couples can host pizza parties the day before or after their weddings.” 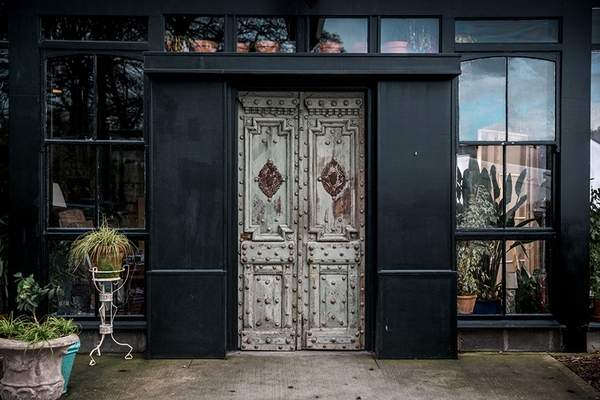 The converted barn can seat up to 220 and features a light filled atrium with a Jacobean library and lots of soft furnishings. A grand piano sits in the corner of the room for guests to play and the décor is a combination of vintage chic with antique and restored furniture. “We’ve used Arts and Crafts wallpaper to frame the entrance into a garden room, which has a wood burning stove and looks out onto the restored walled garden where ceremonies are also held with guests seated in a raised amphitheatre overlooking the pond,” says Adrian.

Mount Druid’s unique style has been entirely created by Adrian and his wife Deirdre. “It has been borne from a need to do everything on a shoestring budget. Necessity has been the mother of all invention in our case thus we’ve never had an architect and wouldn’t dream of using an interior designer.

“I have spent a lot of time in junk shops and Deirdre on eBay looking for things like tea cups and saucers and second hand shoes – items that help make up our various quirky interior collections.” 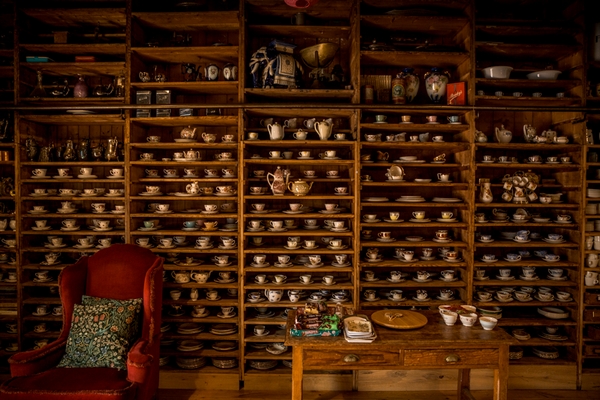 Adrian and the team had the wedding recipe right and were able to scale the business. “We thought it was a good idea to turn into a venue and couples have all the accommodation on site exclusively for guests to stay in. We made millions of mistakes but over time we stopped making them and got better and better and now I like to think we are pretty much flawless.”

Over 50 per cent of couples come from the UK and further afield, making Mount Druid very much a destination venue. “It works well as we are only one hour from the airport.”

The core team comprises 10 full time staff, rising to 25 on an event day. Adrian and Deirdre’s six children, who range from 11 to 22, are also involved. “I often refer to them as reluctant employees, but they do love it sometimes and all know what to do. I hope they will take the business on one day, but only if they want to. My parents ran a B&B, but other than that I had no real experience in hospitality myself. I do however have a degree in estate management.” 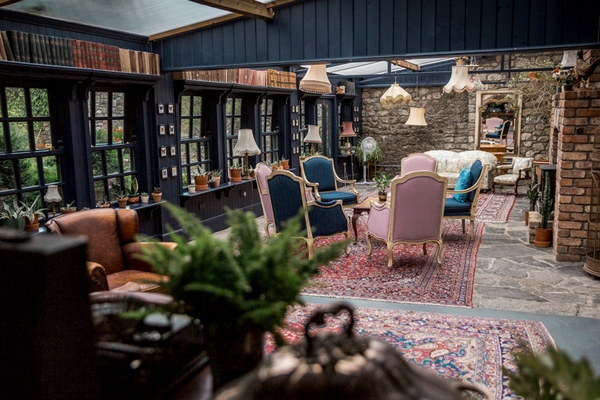 Having been shut during Covid, Adrian turned his attention to an old church in the village, transforming it into a pizzeria . “We make the dough at Mount Druid then take it up the road. It’s worked quite well and helped alleviate the boredom of last year.”

As for the wedding bookings? “We have been fair with them all and just said, ‘pick a new date’. There is so much pent up demand in the market that we are going to be very, very busy and, in Ireland, we still don’t know when we can open – we’re having to play it by ear.”

So, is Mount Druid in profit? “That’s a very good question. When you look at what I spent on the place over the past 15 years you’d probably want to put me in a straitjacket. But we now have the place how we want it and this would have been the year we would have seen the financial benefit. I am sure it will happen, but then I am an eternal optimist!”

Friends have also described Adrian as ‘a bit(!) mad’. “Way back in 2010 when I told the locals about my plans for glamping, no one knew what it was, and they then said no one would want to stay anyway. I have confounded them all!” 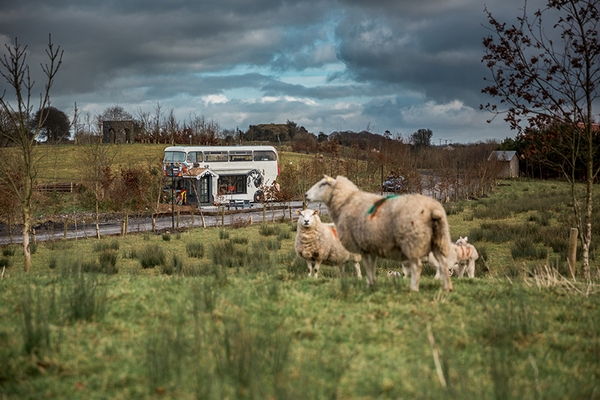 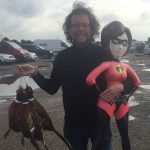