We join Darryl for the largest fireworks event of the year – the Mayor of London New Year’s Eve Celebrations. 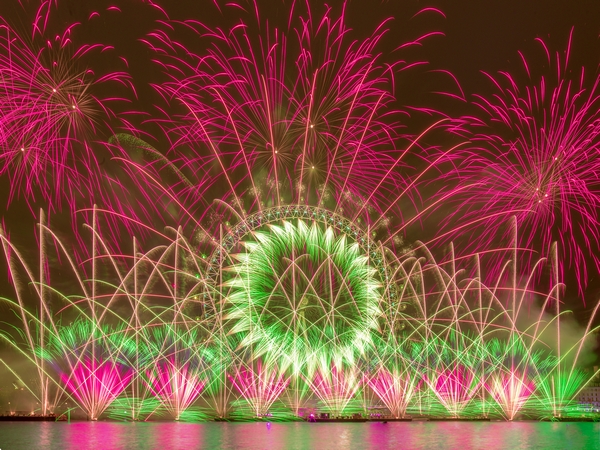 New Year’s Eve started with a live radio interview on BBC London, a car was sent to pick me up at 06:45 in order to get to Broadcasting House for just after 7am. After sitting around waiting to be called into the studio, the interview passed by and I was back at the hotel an hour later. There was no way I would be able to get back to sleep, the anxiety, worry and apprehension combined with the adrenalin and excitement working on an event of this nature is a good combination to prevent sleep.

After a hearty breakfast, I went to our control cabin to meet up with my colleague Will to start our protocol and firing procedure for the show. This entails checking any amendments to the loading plan and creating the master fire files that will eventually fire the display.

The physical method of firing a display of this size is to split the control across five different locations, each with its own firing panel requiring its own unique fire file. Therefore we have to create five separate files and then download this on to each of the firing panels and their respective laptops as well as repeating the same for the backup systems.

At midday I had the first major briefing of the event liaison team (ELT) which I attend in MOD gardens opposite the Eye, a dash across Jubilee Bridge via Starbucks ensures my caffeine levels are topped up. The ELT is a command centre where every agency in London is represented, including our client Jack Morton. Each head of department provides an update and a status of confidence for the show. For us there is still a high degree of uncertainty as the most iconic part of the show, the London Eye, does not even start getting built until around 17:30. This is due to the fact that we are unable to attach any fireworks to the structure until after the last ride for the public at 16:30.

A swift return to Queen’s Walk heralds the crew call and the first briefing of the day, in readiness of the frenetic activity that commences once the pier is closed to all river craft and the public are escorted from the Eye. There are many tasks which have to occur in the correct order to ensure that the fireworks for the Eye are unloaded from the barge and the 15 positions on the pier and pontoons are set up and rigged. So as we approached 15.30, the task force of Titanium crew commence with the moving of barges into show position, unloading the fireworks for the Eye and rigging the pier positions. This activity is non-stop with myself and Will in the control testing each position as it is completed before the crew move on to the next position.

The final briefing and heads of department meeting occurs at 18:00, another trip over the bridge via Starbucks is greeted with a degree of more certainty, all three barges are ready and in show position and the London Eye crew has just commenced the loading of the first props, scheduled to be finished by about 21:30. The weather is good and relatively warm for the time of year, the wind is light and our confidence to complete the rig and deliver 100% of the show is high. All other departments call in no problems and we are good to go with the show.

The return trip to our control at the base of the Eye via Starbucks again precedes the most nerve racking moment of the entire production, waiting for our riggers to load the props onto the Eye, one by one, pacing up and down like an expectant father waiting for the final prop to be loaded. Once completed the Eye can be locked down and the final data cable connections are made. 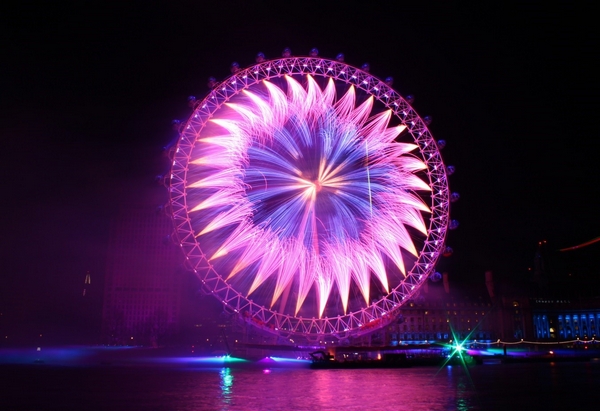 By about 22:00 we are ready. All the outputs are connected and with less than two hours to go before the show, we get the chance to test the middle barge, Eye and hub in its entirety. Pressing the return key on the lap top, I hold my breath as the FireOne software scrolls through the module test sequentially, each time it passes the box turns green. It is agonising waiting for what is only about 15 seconds for all the modules to be tested. At last it’s green across the board for both the module test and ematch test – the countdown is most definitely on.

A final check is then conducted to make sure that everything is in order, simple things like data cables running under a firework, or a pair of gloves left on a rack, checking the angles and trajectory of tubes and effects, just finding a way to occupy time as the clock ticks slowly to the midnight moment. A final briefing is conducted with the crew and spotters are allocated their show positions, the final run through and firing protocol is rehearsed and the crew are stood down for an hour before they go to the final show position.

The firing of the display is probably the most technically challenging operation of the whole delivery. With five separate firing panels located on barges and the pier, we need to ensure they are all in synchronisation with each other, with the music and all start at exactly midnight. Traditionally this has been achieved by sending timecode from a central location which is broadcast to all five locations, a receiver picks up the timecode which is connected to the firing panel.

At about 22:30 I cross Jubilee Bridge for the last time to join the executive producer and show caller at the central control located opposite the Eye. Over our radio net I check in with each of the firers and our spotters located around the site before we start sending timecode at 23:30, this allows plenty of time to react if there was a problem with any one of the locations. At 23:45 the show starts going into positive shot clock with the first test cues firing every 30 seconds right up to the moment Big Ben strikes. With local back up enabled, all firing panels were receiving timecode and running correctly, even if TC dropped out, the panels would run on their own internal clock.

The next call I receive over my radio is from the Port of London Authority (PLA) to confirm the river is closed and is ours. The last checks are conducted with each firer, then we are effectively along for the ride waiting for the launch of the first shells. The last 10 minutes before midnight are probably the worst. All the panels are running and the test shots are firing. The expectation of the crowd is heightened, especially as the countdown clock starts on the Shell building with 60 seconds to go. The midnight moment comes and the thud of the first lift provides a very reassuring moment followed by the euphoria as the show unfolds.

One of the few advantages of this show is my ability to stand back and watch, being directly opposite the Eye in the best position and without any panels and laptops to constantly check. I can study and critique the show, looking for bits of choreography that maybe didn’t work or bits that did. The show passes without any problem and the audience reaction is very gratifying, as is the pat on the back from the client.

A quiet contemplative trip back across the river is met with the realisation that we have a tremendous amount of work ahead of us for the derig. The control is packed away, stripped out and loaded on to the middle barge, as are the pontoons and the pier positions. Then the task of stripping all the racks and disassembling the equipment ready to be cross loaded on to our trailers back at the dock loading location the other side of the Thames Barrier.

It is about 03.00 when the barges finally leave the London Eye location and move back to the dock arriving at about 05:00. We head back to the hotel before returning for 09:00 to strip the barges and load up all our vehicles to return back to base.

New Year’s Eve is usually not far from a 24 hour shift, which seems to fly by so quickly, filled with so many emotions and ending on a massive high once the show is over, but drained from the anxiety and physical nature of task. I would not change it for the world; it is such a privilege working on such a prestigious event and being at the centre of a major national celebration. 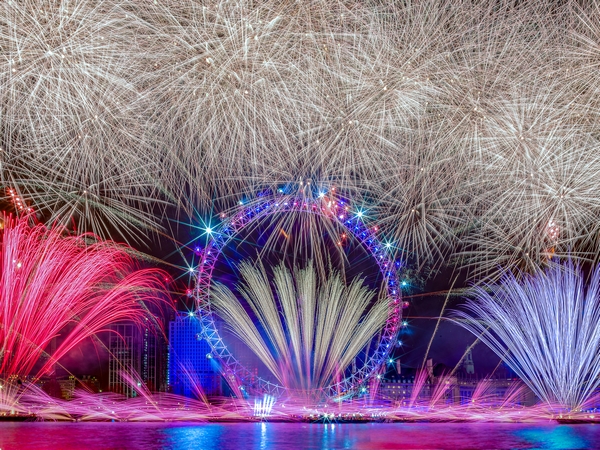 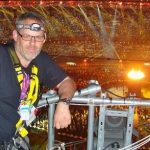 Darryl can trace his firework heritage back to 1986. The culmination of 26 years in the industry saw him take on the ultimate challenge designing and project managing the fireworks and pyrotechnics for the Opening and Closing Ceremonies for the London 2012 Olympic and Paralympic Games.

In 2013 Darryl followed his passion by starting his own company with two other colleagues. Titanium Fireworks has quickly grown into the leading UK company responsible for many of the major events including London New Year’s Eve, Edinburgh’s Hogmanay, Glasgow 2014 Commonwealth Games, England 2015 Rugby World Cup, Forth Road Bridge 50th Anniversary celebrations and Adele the Finale at Wembley Stadium. www.titaniumfireworks.com

The Mayor of London New Year’s Eve Firework Display is a major national celebration and the largest firework display in the country by a significant margin, centred on the London Eye and barges on the River Thames. The display is designed and choreographed to a unique soundtrack that is created specifically for the display.

With over 150,000 people watching from the embankment and adjacent bridges and viewing figures of over 12 million live on BBC 1, it is without doubt the most prestigious event in the firework calendar.